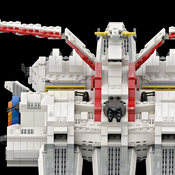 By Lysander1
31 comments
Dear sir/madam,
This is one of the famous space battleships from Gundam series, a hot and great anime series in the field. Her name is Nahel Argama. Although the anime is famous for its mecha like RX-78 Gundam, there are tons of good sci-fi topics inside. Its battleships are just one of the key elements as well. It is a flagship in the Earth Federation Space Force with a famous Gundam called Unicorn housed inside. The ship is so powerful as there are four projectile rails for mecha launching. It is not just a mecha carrier, but also equipped with ionic super cannon at the bottom, two large-sized cannon from the classic orange icon dish at the sides, four all rounded cannons at various position of the bridge and tons of small defensive guns around the whole ship. Apart from the spaceships in LEGO Starwars series like Star Destroyer, which I almost collected most of them, I really want to have a space battleship from other great series. Maybe it is not just my dream, but quite a lot of people in the whole world.
The work consumed around 2300 parts in micro-scale, all from basic LEGO parts. The size is 93 (L) x 41 (W) x 26 (H) studs. The ship will be sub-modelled into different elements and can be easily rebuild the whole ship out, just like building a conventional plastic model. The idea is to facilitate the storage after display or playing. The reason behind is just practical as there are lots of people just live in a small spaced home in the world while they want to squeeze additional area for keep collecting, displaying and playing LEGO great product like me. This is the first time I used the Stud.io software to design the whole thing. The software is just so great and handy in building MOC of any kind in my opinion even though I used Ldraw to design my previous MOC. I am happy that LEGO company finally get the stud.io and the whole Brinklink so that building software will continuously improve in near future. No doubt, computer MOC designing and building is the way to go and for future generation who as a matter of fact will be familiar with computer stuff.
I am a fans of LEGO IDEAS product and so far it seems that the product line lacks some fancy sci-fi themed product apart from LEGO Voltron, which is the first mecha type. There are full instructions behind my work and can be easily amended using the program. I don't mind I share the file with you for further discussion. Frankly speaking, I understand there is a licence issue behind for this product line. However the rest world is just looking forward to see in one day LEGO crossover with Gundam, particularly its mecha setting. The market will be just beyond imagination though I know there are difficulties behind. Maybe it is just a good idea to start something soft like launching its battleship product to see how things will go on.
Looking forward to your approval one day, the first sci-fi space battleship theme product! Thanks a lot.
Dr Chau Hin Lysander