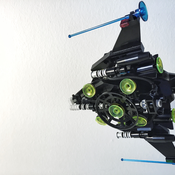 A few decades from now the war between the police and the global organised criminal syndicates (far more organised than in the early 21th century) intensifies, and the police forces needs a new weapon. Something that provides speed for quick traveling between distances, and agility for narrow manouvers. It didn't take long before the hovering "Speedcopter" was developed. A one man aircraft that combines the advantages of both the aeroplane and the helicopter (with an updated technology) became a most welcome weapon for the international police forces in these darker ages that is to come.

The two jet engines let the Speedcopter travel fast across bigger areas to hunt down enemy aircrafts. With the hovering engines (one big for lifting power and four enginges for steering) the Speedcopter can circle around with a very precise manouvering when scouting for enemies at ground level. Just a few years after introduction the Speedcopter became the most used aircraft by police forces around the globe and soon all of the bigger criminal syndicates decreased in activity.