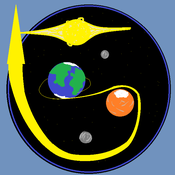 As we once dreamt of traveling to the Moon, now we dream of going to Mars

NASA's Space Launch System, currently being built and tested for its first missions in the late 2010s, will be one of the largest and most powerful rockets ever created by mankind. Taking a great number of technologies from both the Apollo and Shuttle Programs, the SLS is at the pinnacle of human ingenuity and design. Missions to the red planet are currently planned for the 2030s, and this rocket is the workhorse that will get them done.

The model is built to scale to the massive Saturn V kit, and takes inspiration and parts of the Space Shuttle kit as well.