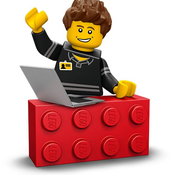 A baby was found in the desert sand in the middle of the night after a large flash and explosion shook the nearby house of the elder couple that found him.  They soon after adopted him and loved and raised him as their own.  They had no idea he would be a prodigy, well advanced his peers. He started building actual jets and rockets while still in elementry school.  They named him Jonny Flash but JF for short.  This model is a replication of the first jet he built.

I built this jet in honor and recogintion of Jonny Flash (JF).

The model would make a great Lego set because it is fun and easy to assemble.  When it is completed is has a cool design and looks nice as a collectors item.