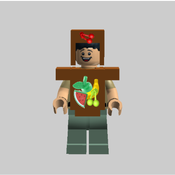 Camp Wanoxett sure to shine on! This is a Lego set including Big Sue, the campsite where the scouts were on the ninetieth anniversary of camp Wanoxett. The figures in this set are Declan, Miles, Owen, Trey, Brendan, A.J., and Ethan. Each figure comes with accessories including, Pixie Stick, Alligator Ice, pocket knife, marshmallows, several sticks, towel, spiders, berries, and snakes. There are a few trees and four tent, each one unique, one has berries, another snakes, one's just normal, and the last, Declan's, has spiders, Declan is afraid of spiders. Trey is the one with a yellow mohawk and is roasting marshmallows, Miles has his Alligator Ice and is pouring in his Pixie Stick. Owen's got his towel and is heading to the waterfront, A.J. is drumming on a bench with two sticks. Brendan is throwing spiders in the fire, and Ethan is playing video games.