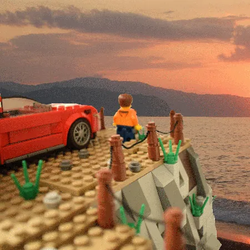 By Neon5
47 comments
In medieval times it is necessary for a kingdom to protect itself. Small keeps on the border help with this. The Red Badger Castle is just that, a small fortress manned by a garrison of brave knights lead by their captain.
The interior of the keep contains a room with a chandelier and Red Badger banners. This room can be occupied by the captain's personal living space, by equipping it with his bed, dresser and clothes trunk, or, swap out the captain's furniture for a highly detailed table with maps and an ax, as well as a spear rack to create the meeting hall. On top of the keep the garrison troops can protect their banner by standing guard while keeping warm by the fire pit.
If enemy warriors attack, the small catapult and the troops' crossbows should take care of it, however, in case of an emergency, a section of the battlements can be changed for their mighty battle-bow, a gigantic crossbow ready for complete demolition.
Both the catapult and the banner can be moved to any part of the battlements. On the outside of the castle, there are four trees that help the soldiers cool off under their shade. An honest farmer plows the nearby fields, providing food for the forces stationed at Red Badger Castle.