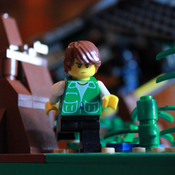 In a world where everyone is pretty it's a crime to be normal. Those that are normal are known as Uglies.  Two friends Tally and Shay are at the crossroads of destiny; with a rumored place out of the reach of the government where you can be normal known as the smoke they must chose to become pretty or remain Uglie.  Shay leaves her dorm and city for the smoke but Tally stays behind.  When Tally is told she can't become a pretty unless she exposes the smoke to the government she sets of on her journey across the country with only a few supplies a tracking device and a long distance hoverboard.  When Tally reaches the smoke she falls in love with David a young Uglie who lives in the smoke.  She decides to stay but in her efforts to destroy the tracking device she activates it and the government comes to take all the uglies away, and Tally learns why.  In the proses of becoming pretty the government implants a device to control you; it's no longer a decision about being Uglie or Pretty it’s about who's in control.

The two parts of this project are this.  Shay's room, here Shay has her ID ring she leaves so they don't know she left, it also includes the device that gives her everything from cloths to snacks.  The only thing that doesn't come out is a hoverboard.  This she charges on the floor, in its charging stand.  The waste basket is to recycle the things that come out of the box.

The second part is a copter with Tally Youngblood and two pretties.  These pretties are given the task of burning an invasive flower species that threatens to take over everything.  The helicopter is from our time the time of the Rusties but the parts that make it up are mostly plastic.

Who will win the Pretties or the Uglies you decide.