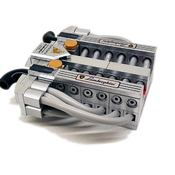 The Lamborghini Diablo was developed in the late 1980s. The task was, to become the fastest production car ever build. Powered by a V12 engine producing 492 hp, the car is able to reach a top speed of 325km/h (202mph). Several tests proved, that it was even faster.

About 2900 cars had been produced from 1990 to 2001. There are many different versions of the car like the VT (with four-wheel drive), the SE30 (to celebrate Lamborghinis 30 anniversary) or the facelifted GT models. Also many cars were produced as Roadster versions.

This LEGO version is based on the later GT model with a 6.0 litre V12.

If you are a fan of the older versions wit pop-up headlights, they are easily replaceable. Further you can decide, if you prefer the Coupe-version or the Roadster-version. And you also can choose between two different spoilers and two different sets of rims.

This LEGO version features all important details and functions:

If you would like to own a LEGO model of this fantastic car,
PLEASE SUPPORT!

Please, also check out my other projects