Diary Of A Wimpy Kid: The Loded Diper 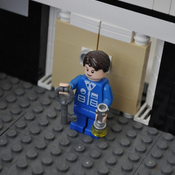 This is Rodricks Loded Diper van from the Diary Of A Wimpy Kid series By Jeff Kinney.  This is a great book and movie and I advise anyone who loves funny comics to read and watch it.  Greg is the main character and he is in middle school.  Rodrick is his rock and roll loving brother. He is having trouble fitting in and as he gets older, his life has some awkward changes.  His friend is Rowley Jefferson.

Thank you for taking the time to view this and don't forget to check out my other projects too!