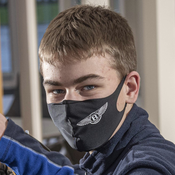 Zek was once a master ninja. Training young warriors the ancient art of Spinjitsu he soon became someone they could look up to; so that they could pass on the skilled technique after him. But overtime the world became corrupt, crime infested the cities and disease spread. Everything Zek planned and held close to him was destroyed... In his anger he decided to change, from then on he transformed himself to fight crime and take back what he had lost.

He built a battle suit with hammers to take out anyone who threatened people, wearing a gas mask and armer he could protect himself from disease and getting injured in combat. Inscribed on the battle suit was a 'z' a symbol of hope for the people of the cities.