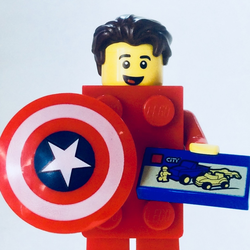 Based on his 1957 Jailhouse rock appearance, Elvis Presley and his band members are in jail but that dose not stop them from Rock'n and Roll'n!

This build includes minifigures of Elvis Presley alongside four of his band members, and a police officer and guard dog to chase after them.  The musicians play instruments including guitars, trumpets and saxophones.

The build is made up of ten jail cells, a fire pole, and spiral staircase.  Pull the lever on the side of the jail to activate the sliding jail cell doors.

Thank you for looking and and please consider supporting and sharing with friends and family!