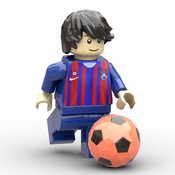 Note: I’m re-posting this earlier LEGO Ideas project of mine all over again for support because, for whatever reasons, my previous LEGO ID as well as the earlier same post titled ‘The Traditional Malay Family Life’ had went missing. Had achieved few milestones... but sometimes. things just happened. Anyway, here’s the re-posting of my project with some updates and looking forward for all the support again. Thank you.

The Malays are an Austronesian ethnic group and nation native to the Malay Peninsula, eastern Sumatra and coastal Borneo, as well as the smaller islands which lie between these locations. Areas that collectively termed as the Malay World. These locations are today part of Malaysia, Brunei, Singapore, Indonesia, southern Thailand, Cambodia and southern Vietnam.

This family consists of a husband and his wife, their two sons and two daughters. They are farmers that grow their own produce and rare their own livestock. In this project, there are 2 cows, 6 chickens, 4 cats and 2 birds at their house. Basically, all the animals roam freely during the day and are kept in their barns during the night.

The traditional Malay house that they are living in is totally made of wood, with no nails and build by themselves and their neighbors. The traditional Malay house floor is normally raised for safety reasons - to shelter them from flood and wild animals. The house has many openings at the highest and lowest level of their house walls as to allow natural ventilation of air inflow and outflow. The roofs design also plays some roles in cooling the house during the day. For this project, I’ve also made the roof to be ‘flip-able’ up and down.

The open veranda detached with the house and the so called ‘pankin’ (or the small stages under the house) are prevalence in a traditional Malay house as they are used for resting and relaxing after the hard work. Like many other cultures of Asia, the traditional Malay does not allow shoes to be worn in their house. For that reason, at each staircase, there is a place to wash their feet made available.

Very simple but yet so practical, and that’s how a traditional Malay family life used to be in the old days.