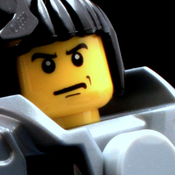 Villa Cavrois in Croix, France is a large modernist mansion built in 1932 by French architect Robert Mallet-Stevens. It is a testimony to the modernist vision of the 1920s as it was conceived by designers such as Le Corbusier, Pierre Chareau and the Bauhaus school. Robert Mallet-Stevens also designed the large park-like garden and the interior of the house.

The house has seen many people come and go through the years. In 1940 it was requisitioned by the German Army. It was returned to the Cavrois' in 1947. After the death of Madame Cavrois in 1986 the house was sadly looted and abandoned. In 2001 the French State bought the house and started restorations with a vision of turning it into a museum.

I am a big fan of the modern architecture envisioned in the beginning of the 20th century. Key words from that era were air, light, comfort and efficiency. Following these rules, the architect made a bold move to build the entire mansion out of yellow bricks. The choice of the LEGO-color "brick yellow" (tan) seemed appropriate.

As always when building in this scale you have to choose what details to focus on and what to leave out. The placing of the windows and the overall proportions of the house is what I focus on. I hope you all like my version of Villa Cavrois!