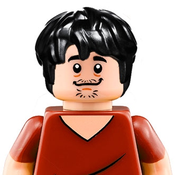 Who doesn't like vikings and yearns for castle sets? I have made this viking longship which is made of around 960 pieces with Studio. The longships were characterized as a graceful, long, wide and light, with a shallow-draft hull designed for speed. The ship's shallow draft  permitted beach landings, while its light weight enabled it to be used bottom-up for shelter in camps. The bow of my ship is decorated with a carved head of a menacing dragon which scares the enemies and protect the crew from sea monsters. The stern, however, is decorated with a rounded wooden block. The ship haves space for seven oars and rowers in each side. Also haves space for the helmsman near the helm in the stern. In the middle has a black mas with a sail and a small flag. On the sides of the ship, there are gaps for the long oars to enter and grabs to put the eighteen shields. In the image, there are fifteen crew members, but it can be up to eighteen.

This is already the theoretical part... I'm going to differentiate the different topics for greater understanding:

As I have said before it would be around fifteen and eighteen minifigures (I think that sixteen is the best number). In the picture I use Rohirrim's pieces and other parts, but they are only orientative. I suppose that Lego would have to make new prints with chain mails, leather clothes, tunics, bearded heads, etc. Also It would be good to make some new helmet, beard and hair pieces (pigtails, long hairs...) so that there is variety. In principle, I have thought in lego random minifigures (yellow-head vikings), but also there is the posibility of make them of the Vikings TV series (but I guess that would bring difficulties like acquiring licenses).

The shields are like the minifigures that I have used, there are only orientative. In my opinion the best piece for them is  which I have use in the example. Lego also would have to make new prints of different colours and versions for this part, to give life to the boat (like the old viking shields, like that...) There have to be eighteen in total, neither one more nor one less.

The ship fits perfectly, but  some pieces that I have used to make it didn't have a reddish brown  version, so Lego would have to create them.

Also, apart of the bags of the set I think there should be another small bag with enough accesories (like swords, axes, bows, spears...) for all vikings. I think that there should be aparted because there isn't space for them on the ship.

I really have enjoyed building this ship and I am very happy with the result. I hope you like it!