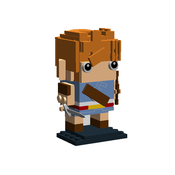 Hello everyone, I'm Henny4315, and this is my latest project.

The LEGO ninjago golden peaks was first introduced in season 2 episode 14, darkness shall rise. In this episode it was revealed that this was the birth place of the 4 golden weapons which are, the Sycthe of Quakes, the Nun-chucks of Lightning, the Shurikens of Ice, and the Sword of Fire. Later in ninjago history these weapons were retrieved by the ninja. However lord Garmadon, the father of Lloyd Garmadon, and brother of sensei Wu has now taken these weapons while the ninja fought the great devourer, and has brought these weapons back to there birth place the golden peaks.

What does it include? Lord Garmadon, the 4 golden weapons, the mega weapon, and the action packed set Golden peaks with more than 300 pieces and many play features.

Why you should support? Well, obviously as I said before it has many play features, and plus I worked very hard building this. If you don't believe me then here is proof.

Yes, this is the model in Lego digital designer. Instead of me showing you all the pictures and play features, you can see it for yourself!

Please support this and my other projects, I'd really appreciate it, and once this reaches 50 votes I will give a shout out to everyone who told me they supported!

Thank you and have a great day!