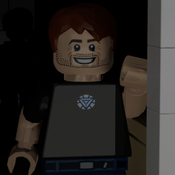 This Ideas project is for a set of Microfighters based on Marvel’s Agents of S.H.I.E.L.D, specifically, two of the most iconic vehicles in the TV series.  Agent Phil Coulson’s 1962 Chevrolet Corvette, affectionately named ‘Lola’ and the Boeing C-17 Globemaster III, or as the team refer to it, ‘the Bus.’

Apart from the vehicles, the set would include both of the minifigures shown, Agent Phil Coulson, currently the Director of S.H.I.E.L.D and the pilot of the Bus, Agent Melinda May a.k.a ‘the Cavalry.’  Also included would be the weapon that made Coulson utter the line, “ah…so that’s what it does…” the Destroyer Rifle, the weapon Coulson used against Loki in the Avengers Movie.

The total piece count, including the vehicles, the minifigures, the Destroyer Rifle and three pistols (one for Coulson, two for May), comes to 210.

If you are a fan of Coulson and May, a fan of the show, or even just a Marvel fan, I hope you will consider supporting this project.