Welcome to the Black Parade! 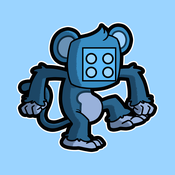 When I was a young boy, my father took me into the city, to see a marching band...
He said son when you grow up, would you be the savior of the broken?
Will you defeat them, the non-believers? The plans that they have made?
Because one day I'll leave you, a phantom. To lead you in the summer.
To join the Black Parade....

"My Chemical Romance" or, "MCR" is Emo/Punk Rock band from the early 2000s. During the band's life they released four albums, their most popular of which was "The Black Parade!"
In the early months of 2013 the band announced that they were breaking up! However, seven years later, on Halloween of 2020, the band announced they would have a reunion tour, and are now "somewhat" back together!

This model depicts a parade float from the music video of "Welcome to the Black Parade," in which the band sings the song while becoming a part of the Black Parade.
The build contains just under 600 pieces, and measures in at about; 9in L, 5.5in W, and 4in H!
It also includes all 5 members of the band, at the time; Gerard Way, Mikey Way, Ray Toro, Frank Iero, and Bob Bryar!
---
We'll carry on....