Be sure to vote for the Rome set first, since it's the most popular civ by far, and it's now the fastest-moving Ancient World set that has ever been posted on Cuusoo at any point in time, past or present, and it's accelerating at 360%... If they only make one Civilization set, then this would logically be it! Lego fans have been asking for a Rome set for ages, all the molds are all ready to go, and a Forum battle playset with elephants and ballistas, immortalizing Hannibal's world-famous gambit to crush Rome would be a guaranteed hit! 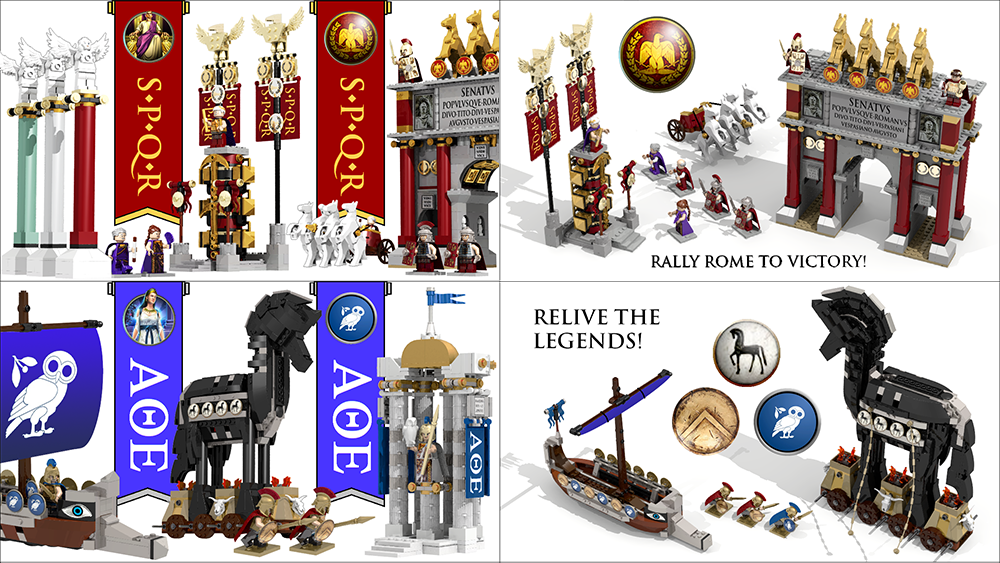 The next two fastest movers are The Odyssey Begins and my Real Historical Egypt set with some never-before-seen models. If they only do two, it would be ideal to do Greece and Rome as equals, and if they do a third, then Egypt will round it out beautifully... 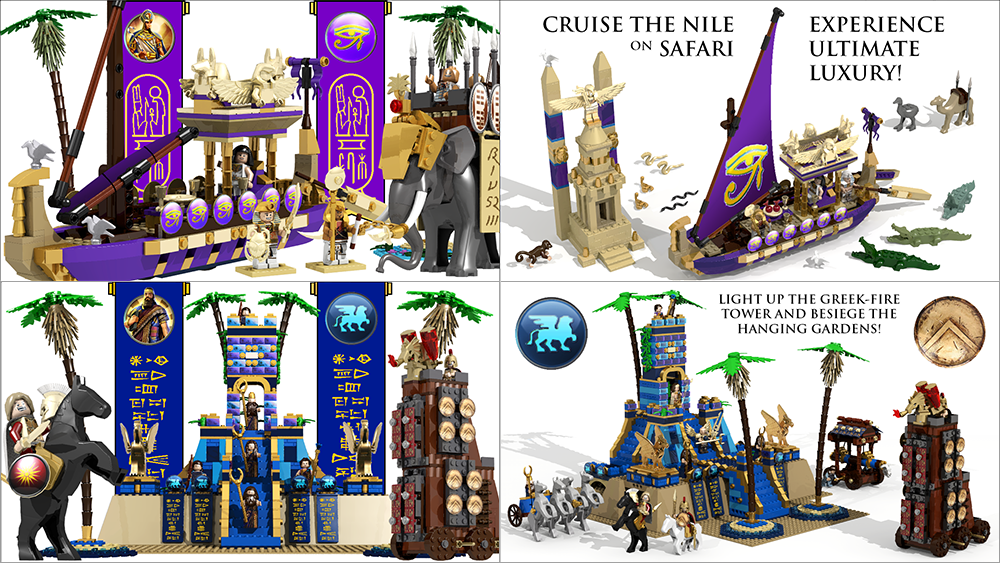 The next two fastest movers in the global ranks are The Hanging Gardens of Babylon and Stonehenge and Fort. When they are ready to expand the line, these will be the coolest ways to add more iconic wonders, and create a greater scope of the Ancient World... 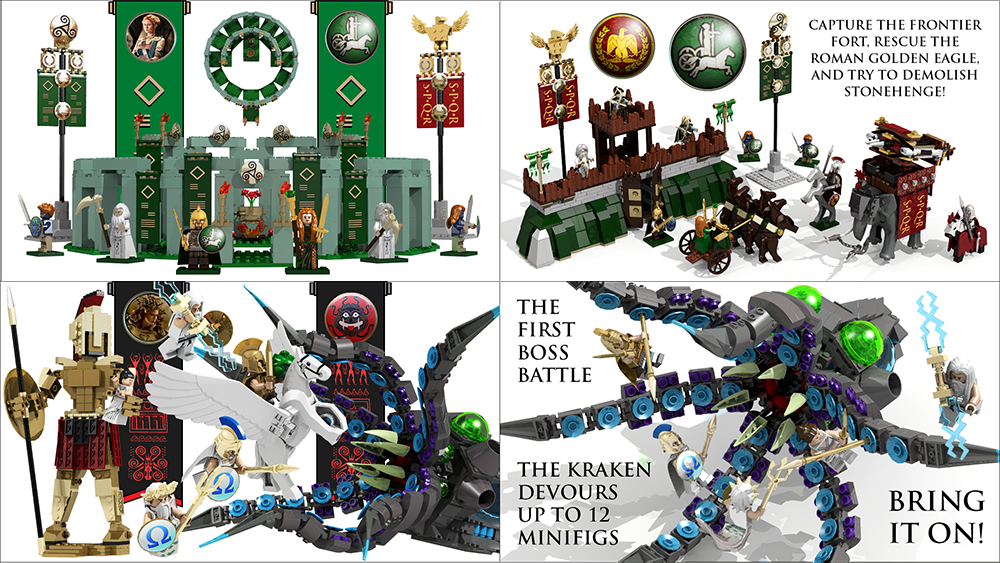 And the last one I am pushing is The Titans Set. Kids love monsters, and it's a great way to inject an Epic storyline. All of the sets I've mentioned above are right about the $130 mark, exactly the same as The Battle of Helms Deep or a flagship Legoland Castle set! 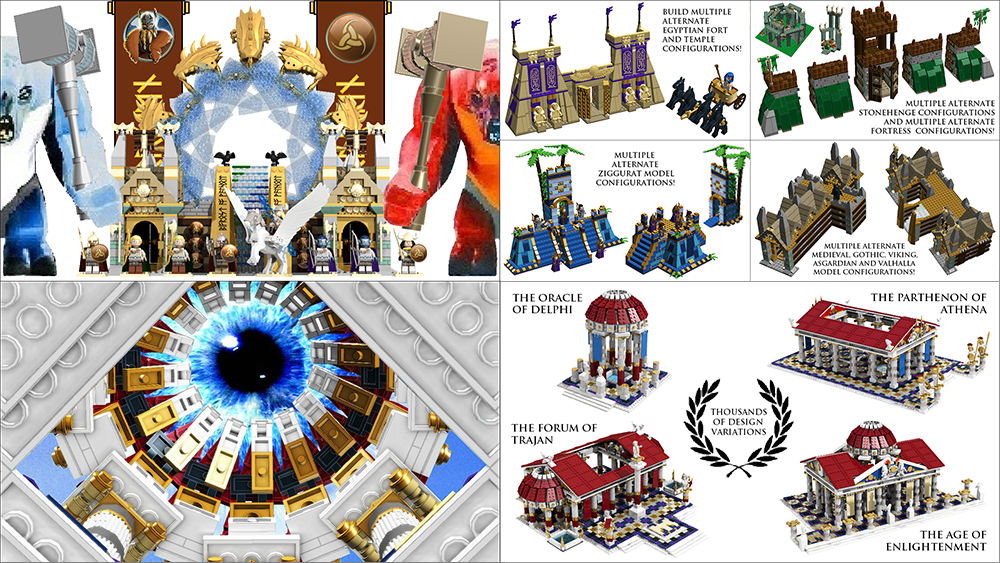 The Spartans set is designed to be smaller, just about $50 or so, and it has a perfectly standard ratio of minifigs to bricks. But since it is more focused on troops, I am thinking that it is something that they would want to release later on as an expansion set...

The Vikings set is a marvel to behold, and it's distinctly bigger than most of the other sets, perhaps $180. Sets of that price are sold exclusively in the Lego Store and online, and so again, I think that it is something that they would do as a follow up later on. I want to focus on the sets that can be sold on the shelf in all the normal stores first...

And finally, the Ultimate Collector's Series set...! The Infinitely Modular Classical Temple Building Set is one massive $250 set that can build up to seven different alternate models of real world temples, plus it lets you build and play more than seven authentic Ancient and Medieval games, including Senet, Go, and a deluxe Classical World Chess Set with Greek versus Roman minifigs! This would be an eye-popping set to sell in the Lego Stores at the mall, and perhaps at major Museum Gift Shops around the world in the future.

So now that it's clear which ones are destined to lead off, I have re-numbered the sets a bit, and re-spliced the storyline to match. And remember, every one of these sets has been placed on its own individual voting page since the very start, so they should be willing to green-light as many of them as reach 10,000!

All of the set pages tell an epic story if you read them in order... I hope you enjoy!! =D

You can vote for your top favorite civs, or just support them all... You can suggest a higher price-point for any civ you like best when you press the button to vote, or a lower one... And tell them exactly what things in the set you want the most in the final comments box when you cast your vote, so when the project finishes, they will have all the data they need perfectly at their fingertips, and it will be a guaranteed hit.

Beyond that, they could easily branch out into matching sets for other civilizations, including the Aztecs, the Mayans, Africa, India, China and Japan. From there, it could be expanded into the Medieval, Renaissance, Napoleonic, Steampunk, Modern, and Futuristic Eras!

Plus it could inspire them to add more historical details and more fun educational value into Castle, Pirates, and Indiana Jones style Adventurers sets. And if they invest in making a few new prints, they would be able to re-use them for literally centuries and millennia to come!

Will it be as popular as Batman, Harry Potter, Lord of the Rings, Ninjago, Chima, Zelda, MineCraft, Bionicle, Technic, Trains, Classic Space, Star Wars, Superheroes, or Teenage Mutant Ninja Turtles? Only one way to find out... Cast your vote!! Let's do this!! =D