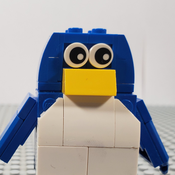 By penguin_brik
4 comments
To celebrate the 14th Anniversary of the popular game, Club Penguin, I have constructed a LEGO model to celebrate this momentous occasion.
What is Club Penguin?
Club Penguin was a popular children's MMO (massive multiplayer online) game made on October 24, 2005. Unfortunately, the game was shut down on March 29, 2017, leaving numerous players distraught by the sudden end of the game. However, the game still has a large fanbase with many non-profit recreations. The project depicts and references the homes in the game called "igloos" that you can personally customize.
Why Did I Build This?
I am a big fan of Club Penguin and have dedicated lots of time to these recreations. I want to express my love of the game with LEGO. The game has a huge element of customizability which could be done well in LEGO.
Details
The set includes:
There are many studs on the wall and floor where the decorations can be placed. The snowball launcher can throw snowballs when you place one on the gray end and tapping the other end to launch the snowball. The penguin wears alternate costumes of a pizza chef or a construction worker. The penguin could also be placed on the sled and pushed around with it's flat bottom.
I hope you enjoyed this project and I hope the support goal is met.
Waddle On!