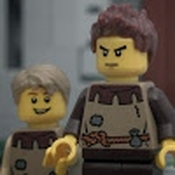 The future is bright...
The future is green...
The future is armoured...
And it sits on 2000 pounds of evil smelling tusked terror!
This rider was one of the strongest and meanest in his tribe and has spent its entire life fighting whilst riding the fierce War Boar, which naturally brought the attention of Ugglug the Orc, scourge of Middle Zealand. Having been hand-picked personally by Ugglug himself, and kitted out in the finest armour scavenged from a hundred different battlefields, this Orc is now one of Ugglug's closest lieutenants, a trusted member of the warband known as Ugglug's Armoured Orcs.

If you see it on the battlefield, beware! Ugglug and the rest of his band are sure to be close at hand.

Interestingly enough, I'm not the greatest fan when it comes to brick-built animals generally. Consider the amazing shape, quality and articulation of the modern mould of LEGO horses for example and how impossible it would be to re-create that with normal elements. However I came across this initial design four years or so ago, which inspired me to take a look at recreating this classic mount for an Orc warrior.

My version has changed quite significantly since then, with at least two major redesigns of the head - allowing for a printed eye as well as the snout and nostrils (which I think is fun as it is particularly boar-y) as well incorporating modifiable saddle accessories and an updated tail section. This has probably sat on my shelf for a good year at least, during which some minor tinkering has taken place, before its eventual inclusion here. A significant addition to the lieutenants were the arrival of ultron sentry officer helmets, which rounds it off really nicely.

This set is a nice size for a Polybag (as an introduction to a new fantasy/castle line) and would contain enough extra saddle / boar accessories (chains, weapons and clips) to allow some variation in boar design, but without losing the feel that these troops are definitely an organised unit... at least for Orcs that is! (Particularly if people wanted to make multiple purchases)

Even if collectors weren't especially fans of having an Orc riding the boar, there will be plenty of Lord of the Rings fans that could use the modified boar as a mount for Dáin II Ironfoot from the Battle of the Five Armies Set.

As for the final design of the Orc itself, I went for the fantasy era (sand green) Troll warrior as I really like their face. It isn't too angry or fierce looking like some of the LOTR ones (not that there's anything wrong with them) but it still has a satisfyingly Orcish expression to it. However I am open for the minifgure design to change - especially since that particular minifigure used is not currently in production (as far as I know). It is, after all, the boar that is the unique and important part of this set.

PIECE COUNT : 53 per boar (not including minifigure or weapons)