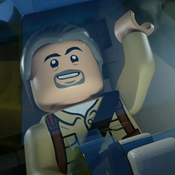 By Brick_Hoskins
78 comments
The Brick Separator launches an assault on a medieval castle.
Knowing that no weapon other than glue can stop the Brick Separator, Sir Bob Howard pursues the destructive creature on his faithful steed, Pasty White. Upon arriving at the castle, he finds that the Brick Separator, having pried open the drawbridge, was about to begin its awful separating! Sir Bob heroically saves the day (of course) by squirting the creature with glue. Thankfully, Sir Bob's glue bottle holds a ton of glue. 😉
The king was so delighted, he gave Sir Bob half his kingdom and the hand of his beautiful daughter, blah, blah, blah . . .🧡 Amazingly, the Brick Separator turned out to be quite trainable and was tamed just in time to be the ringbearer at the royal wedding.
This is my second LEGO Idea that features the Brick Separator. It also includes a large castle with a moat and drawbridge, turrets, and a stable holding two horses. Three knights are included in this set, along with the King, the Princess, Sir Bob Howard, and his horse, Pasty White. The Brick Separator is the same build that I used in my previous idea which was replicated off the poster featured in LEGO's Palace Cinema set.
Please support and let me know what you think. Thanks so much!