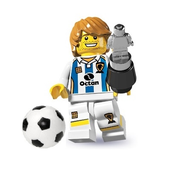 SpongeBob SquarePants is a popular 1999 Nickelodeon cartoon about a fry cook sea-sponge named SpongeBob SquarePants and his adventures in Bikini Bottom.  SpongeBob works at the Krusty Krab as a fry cook and also likes to go jellyfishing in Jellyfish Fields.  His friends are Patrick Star, Squidward Tentacles, and his boss Mr. Krabs.  He also has a pet snail named Gary.

In this Lego SpongeBob set, SpongeBob can wear his Krusty Krab uniform, his karate gear, a Santa hat, or an antennae and hat from the episode "Boating School"  The set also includes a fry grill and a jellyfishing net with a small Jellyfish Fields scene.

If this set gets 10,000 votes, Lego SpongeBob could be a Lego Ideas set!