LEGO Lilo and Stitch: The Red One 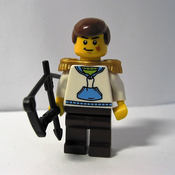 "Yeah, he took the red one." Unnamed Alien.

Escape from pursuit in the Red Police Cruiser from Disney's Lilo and Stitch.  The ship is red with a white stripe. I It has an opening cockpit and console. It has police lights and dual engines.

Also it could possibly feature a beach with a small tree. The beach area could also include a beach chair and surfboard.

Other features could include a clear stand for adults to use on display. Another feature could be a six shot stud blaster on the bottom, as a play feature younger children would enjoy.

The Minifigures could be Lilo in her red dress and Stitch in his red spacesuit and with yellow ray guns. (NOT the Disney Minifigures version.)

If you would like to be able to purchase this model as a set, then please hit the support button.