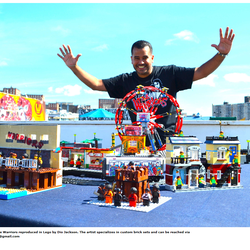 The Sandlot film was released in 1993. A story about a kid by the name Scotty Smalls who moves into a new neighborhood and wants to learn how to play baseball. The team's best player Benny "The Jet" Rodriguez takes him under his wing, introduces him to the players and Scotty eventually becomes a member of the team who play at The Sandlot. This is more than a story about baseball or being on a team. It's how a group of kids grew up to become best friends. I welcome you to my Lego version of The Sandlot.