How to Train Your Dragon! 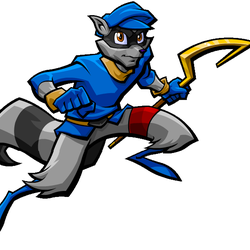 thebrickwell
10
Hello. This is another Brick Well project and first of all the Well does acknowledge that the How to Train Your Dragon has been glossed over before and that all the ideas contained there in are new and original. The Brick Well was hoping to take a different view on the project so as to introduce new models and different ideas not previously seen! First off all as seen above the obvious choice for a iconic first model was Hiccup and his loyal dragon Toothless. The above preliminary design was constructed on Digital Designer 4.2 to provide maximum availability of pieces and a nice finished look for the model! The only elements not seen here that probably would be included are a basket and one or more fish so Hiccup can feed Toothless. However a detailed design has been attempted to make up for a loss of accessories. Toothless has a completely moving lower jaw and his wings are constructed from Lego pieces so they can flex and turn in almost any direction. He also has moveable legs and claws. So Hiccup is also able to ride on him there is also a saddle between the wings and detailed chains linking the flight controls to the synthetic tail flap. This set is mainly designed for basic play or display and as such does not contain any functions such as launching missiles. A lot of the coming designs in the theme will be similar but will also be designed for a decent build and a large model. This mainly dragon model themed line will be aimed at builders roughly eight and above! An expanded minifigure collection will also be designed for maximum play possibilities and unseen dragon models such as the Gronckle! The Brick Well will return soon and will be repeatedly updating the project this week! See you soon. 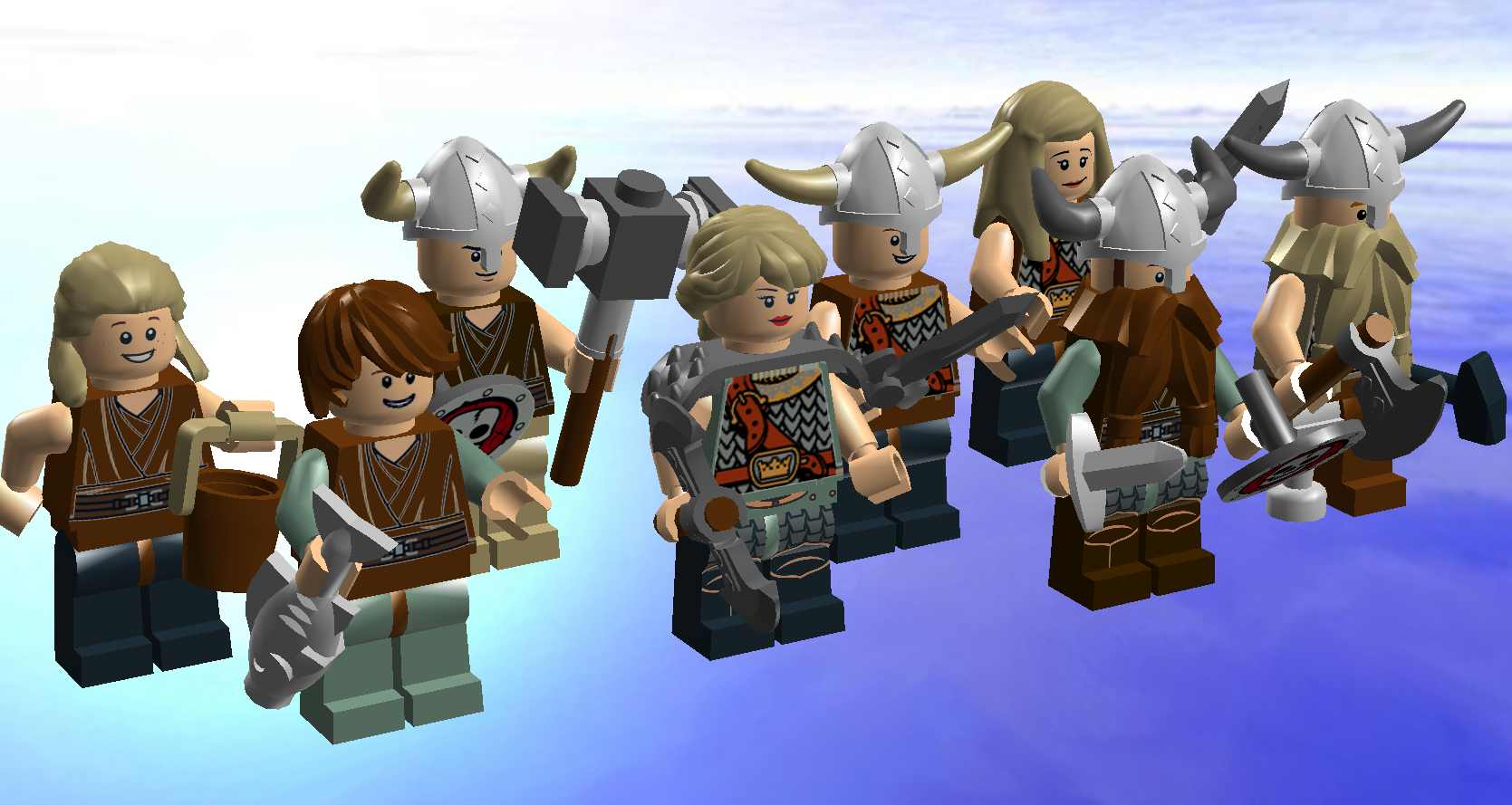 As mentioned above in the previous addition to expand the How to Train Your Dragon minifigure universe the Brick Well has added a collection of the main film characters to expand ideas of possible characters in set designs and because the minfigures are not as much the stars in all the dragon themed sets. Above are all the main characters who appear regulary in the film and from left to right they are Hiccup (far front left), Astrid (front left), Stoick (front right), Gobber (far front right), Fishlegs-an addition with hair (far back left), Snotlout (back left), Tuffnut-that might be mixed up (back right) and Roughnut (far back right). Some of the characters may not be as realistically represented as they have to wear helmets, but this will vary in many of the coming designs as characters will be altered to suit a set and for maximum versitility. The above minifigures are really just a template for the designs of the main characters. There will also be new characters in many of the set designs with different accessories. Especially look out for characters in set where they match the dragon they ride!The Brick Well is already working on designs for a Deadly Nadder and the never-seen before Gronckle. The Well will update this project in the next few days. See you all again soon! 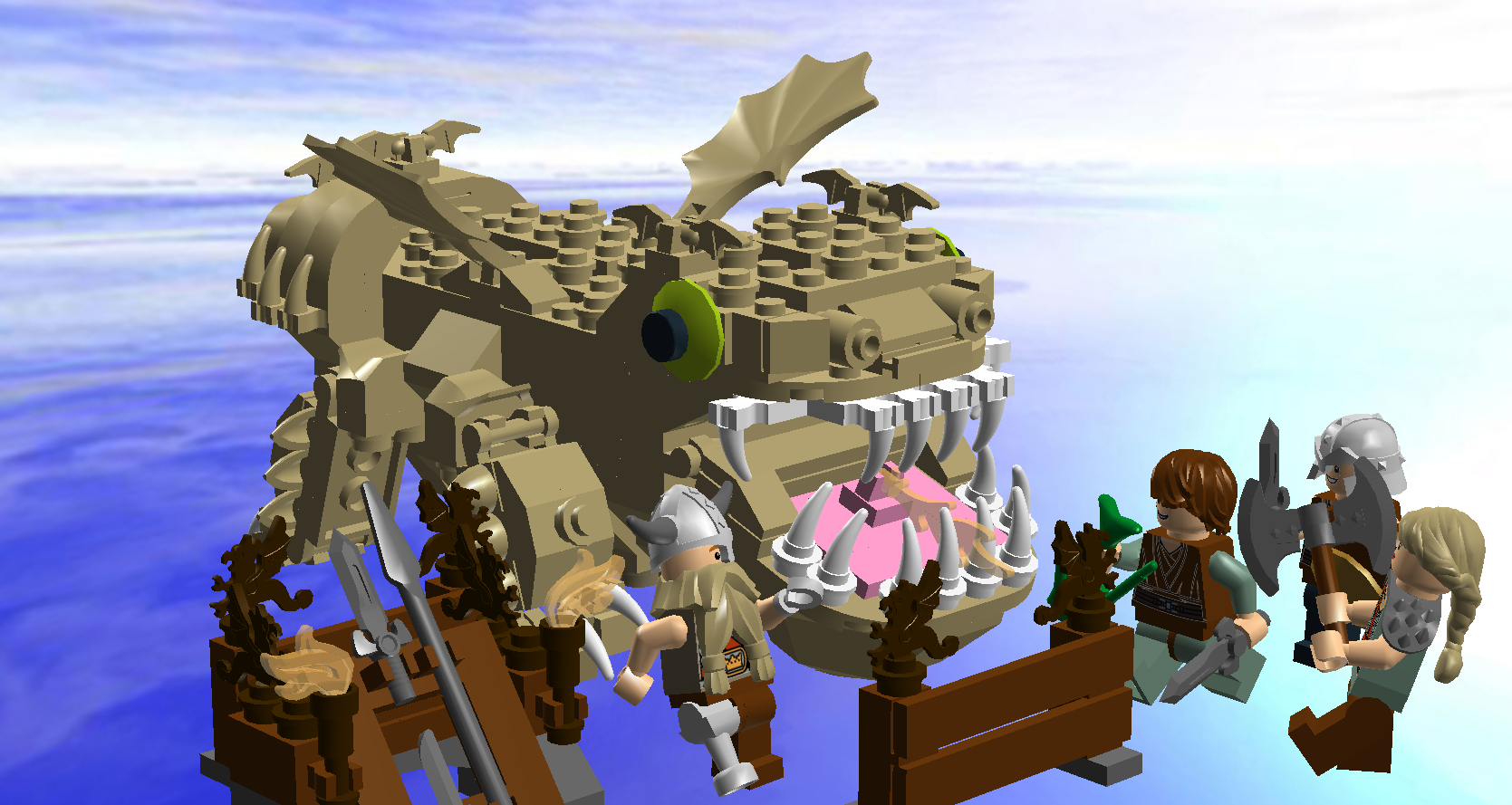 Hello everybody. As the project is still relatively new the Brick Well thought it was worth jumping straight into the game and introducing a new concept: the Gronckle. This dragon model has been included in a set which was particually styled around a concept of the film which usually featured this fearsome dragon! Constructed on Digital Designer 4.2 and containing about 250 pieces in the dragon model itself it is probably the most comapact design yet featured. The Gronckle model was especially designed to be a large and compact model just like the actual dragon as it is large and stocky! The Gronckle also features small wings as it only has little fast beating wings in the film and a large, stocky tail to smash through boulders! The Gronckle is fighting the young vikings in training just like in the film when Gobber (included here) is teaching them to fight dragons. Likewise the set also conatins appropriate minifigures which include Hiccup with a sword and sprig of grass to sooth the dragon, Astrid armed with her battle axe and shoulder armour and Fishlegs with a sword and shield as he of course ends up riding the Gronckle. The set also comes with training barriers for experience in a rugged environment and a weapons rack for the vikings to arm themselves in other dragon fights. Gobber is also pictured here to help the young trainees if things get sticky! The Brick Well be be back again soon to publish a new design for the Deadly Nadder! See you all then! 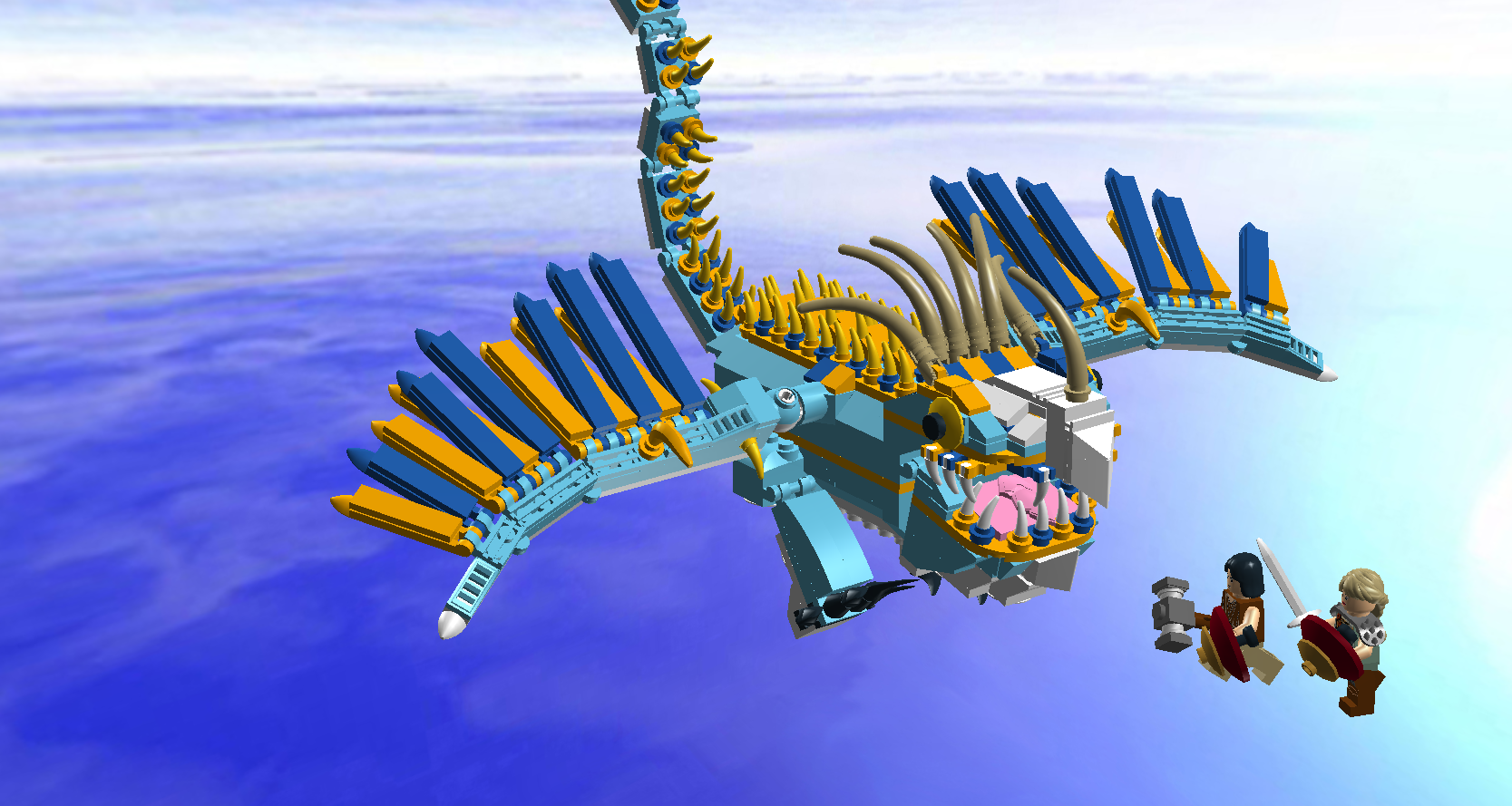 This is the Brick Well again! First of all the Well would like to show the huge amount of appreciation for the fantastic eight new supporters this week, as you all know this project has been posted before and there is tough competition! The Brick Well has really made an effort to try and make all the models included within this project of a new style and original design so as there is no plagirism involved and everybody presenting this idea is being given creative liscense. The Well also acknowledges that other projects have put in the hard work to present their ideas and that the Well is not trying to take credit for it. On the subject of the project as said above the Brick Well has posted a new design: The Deadly Nadder. This is by far one of the larger and more detailed models as it contains a large amount of pieces at about 720 and contains several small pieces like Lego fangs for explicit detail! The Nadder like the above models does not contain any functions such as launching parts but it does have features such as fully articulated wings for maximum play. It also features moving legs, a hinged jaw, movable head spikes and a sectioned tail with five movable sections! This concept is based on the section of the film were Gobber is teaching the vikings to fight the Nadder in a maze construction within the arena. As such it also includes minifigures appropriate to the situation which are Snotlout armed with a hammer and shield and Astrid armed with a broad sword and a shield to protect from dragon flame. As this is a preliminary design it has had to forgo a few added details such as a few additional minifigures and a battle wall/s for a training environment. This will be made up for though when new pictures are posted. Designs for the Monstrous Nightmare and Hideous Zippleback are being worked on including a large project which at the moment is secret. Thanks for voting and see you soon. 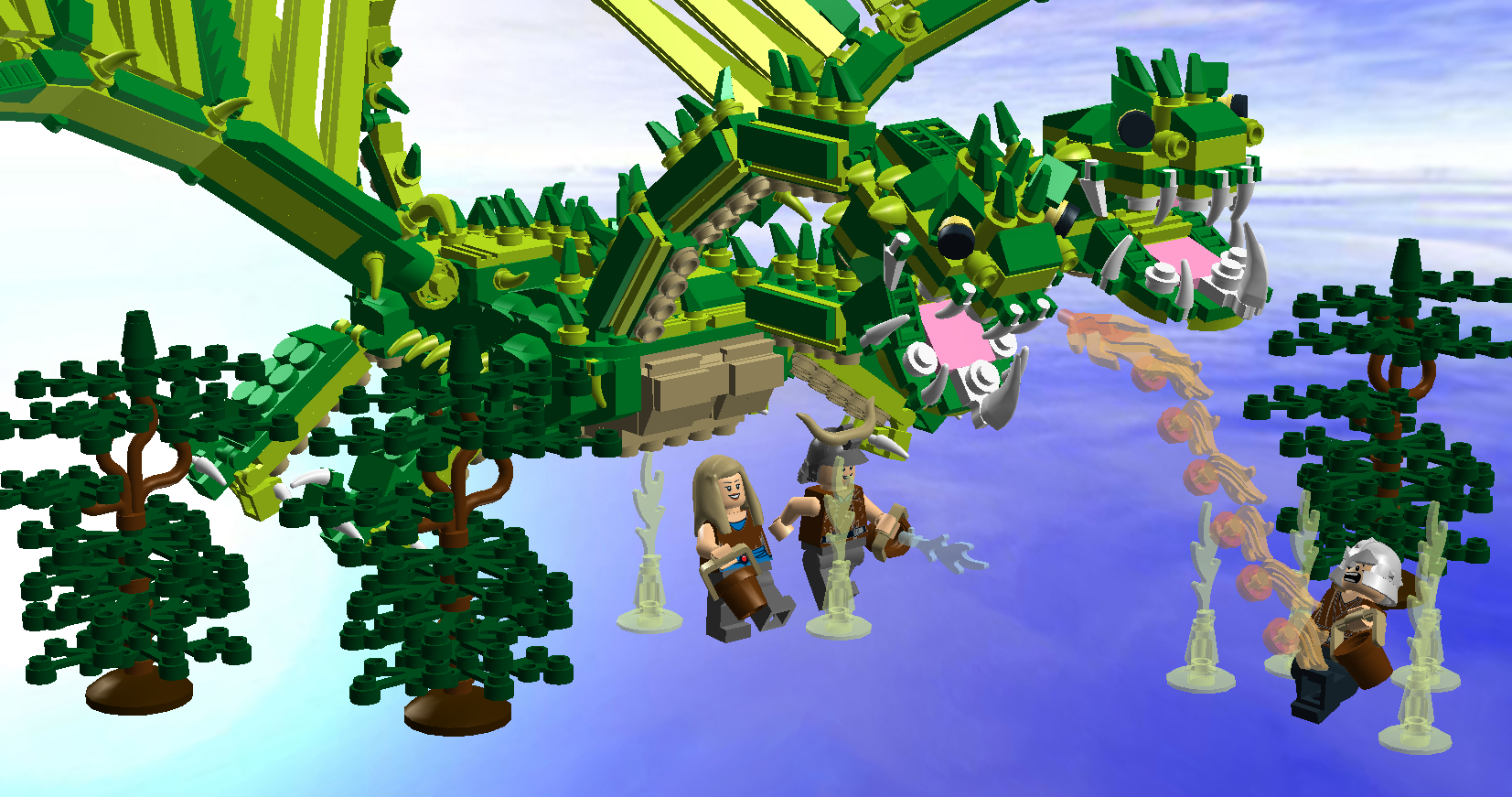 Hello! Here is the next project update from the Brick Well. As mentioned in the above description for the Deadly Nadder it is the Hideous Zippleback that has been added next to the expanding menagerie of dragons because it was a unique and different type of dragon compared with others and provided some new and exciting oppurtunities for a building model-(E.G:Having two heads). If supporters are wondering why it has taken a little while for this next update to appear it is because it was rather more difficult to design around its structure of two heads and tails. There was also a difficulty in designing rather smaller and streamline heads so they did not look oddly large on long and thin necks. However thanks to the delay the Well has been able to add lots of detail and attention to the model which paid off by making it the largest model at about 1,200 pieces! As in the actual film it boosts many spikes-52 to be exact-down its back (hence the name) so as to give it a real living look. It also has large flexible wings and moving legs and jointed tails. As usual it does not include any extra play functions like missiles, but if the idea comes through it can be modified. Relevant to the film there are minifigures included of Ruffnut, Tuffnut and Fishlegs when they must fight a Zippleback during training. Each also holds a bucket of water to put out dragon flame just like in the film sequence. There are also green fire flames representing the dragon breath gas and some pine trees not actually in this particular sequence but included for extra playability! The dragon for an extra touch is also shown breathing Lego flames. Sorry for any complaints, but I have only just found out a few weeks back that Cuusoo only allows four pictures. A design for the monsterous nightmare may not be posted.