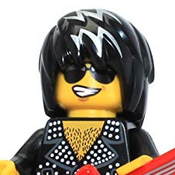 By Andrea Amaglio
25 comments
Rock and roll is still alive and kickin’ and it’s back in town!
The air becomes electric for the stunning guitar riffs coming from the Rock The Brick live show and soon the music will take in every corner of the city.
I have always loved both Lego and rock music: it was therefore unavoidable that these two fantastic worlds crossed to give life to this amazing set.
The MOC sets, I found on the net, didn’t satisfy me because I found them too complicated or – on the contrary – too simple and poor in detail or, sometimes, too tied to a specific band: so I decided to create my own Lego rock stage.
I wanted my project to be rich in details and well constructed but, at the same time, not too complicated and built with a reasonable number of pieces. The stage had to be beautiful to look at, realistic and powerful, but also solid and editable so that everyone could easily adapt it to their favourite band.
The design phase took a long time and was complex, both to be able to identify a pleasant layout and to find the right pieces and colors to translate my idea into something realistic, credible and technically sustainable.
My choice was to create the stage of a rock festival – called Rock The Brick – with all the musical instruments (electric guitars, bass guitars, drums and keyboards), the amplification system, a mixer desk equipped for audio and video live recording and a small but well – stocked corner shop where fans could buy their favorite records.
On the back side I placed a simple mechanism through which it is possible to quickly replace the backdrop (printed, painted or drawn on a cardboard), so that everyone can customize the stage for their most loved band, freeing their creativity and imagination.
Another important feature is the dual functionality of this creation: in fact it is designed both to be inserted between modular buildings and to be used in stand – alone mode (on a bookcase, next to your record collection or near your mp3 speakers to make your music real).
Right now The Shiny Shadows are playing: a group of six wild female rockers who will set fire to the night and the hearts of the audience.
I’m sure there are thousands of Lego fans and rock fans out there who can’t wait to take home this set and turn up the volume to make the speakers jump off the stage: if you are among these, please vote and make the dream come true! Thanks and…let’s get rocked!