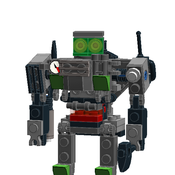 This is based on the droid gunships seen in the clone wars series, I know that two full size sets have already been produced by Lego but I thought this would be a nice edition to the smaller scale models Lego has made for star wars. I think it would fit in scale with the larger Slave-I model that was released in a poly bag.

I have been messing around with the idea of a mini droid gunship since I got the first full size one Lego produced, Its a bit bigger than most small scale star wars models, but I am working on a way to make it work as a Micro-fighter.

Hope it looks Ok for a first attempt.