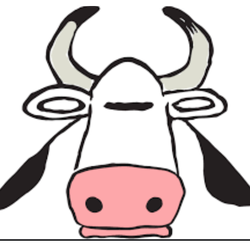 It's a cow dragon with joints between its five segments, and moving jaw and legs. It has eyes like Gary Larson draws, which I think for this set is a lot better than regular lego eyes. It's supposed to be like a Japanese dragon, with no wings. I built it because I really like cows and then I thought of a cow dragon. And I can't think of a really good idea like that without, at some point, trying to make it out of lego. (P.S. This is in no way related to, or inspired by the T-cow set.)
If this became a set, it would be nice to have the horns be bigger, and yellowish white.
43