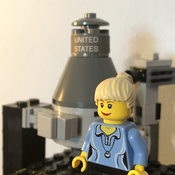 The Mercury 13 women are an important part of space history.

Between 1960-61, a group of women pilots in the US travelled to the Lovelace Clinic in Albuquerque, New Mexico. They were there to undertake astronaut testing as part of an independently funded Woman in Space programme. These were the same demanding physical tests endured by America’s first (male) astronauts. Thirteen women passed. These women are now known as the Mercury 13.

After the programme lost its funding, they never flew into space but these women showed that they had the drive, ambition, physical endurance and ability to fly a Mercury spacecraft, like the famous Mercury 7 men, and explore the unknown. These women also had the right stuff. Let’s celebrate their achievements.

This Lego Mercury 13 set would pay tribute to the American women and the medical doctor who proved that, in theory, there was nothing stopping women from being part of human spaceflight. History would prove them right.

The set would consist of three vignettes - including a Mercury capsule, plane and test lab scene - and four Lego figures: the medical supervisor who made the tests possible and three of the Mercury 13.

In 2021, it will be 60 years since the women passed their tests and the programme was cancelled. World Space Week, in October 2021, also has a theme of women in space.

It would be great to get this up and running and approved by then, accelerating the process by getting to 10,000 likes as soon as possible. Please be aware, that these Lego figures are all taking the necessary precautions against the coronavirus.

Cobb was the first woman to pass the physical astronaut tests in 1960 at the age of 28. An exceptional pilot, holding several world records for flying, her performance in the tests was within the top 2% of all NASA’s male astronaut candidates for Project Mercury. The vignette will reproduce a famous NASA photograph of Jerrie standing beside a Mercury capsule.

Funk was the youngest woman to pass the tests at age 22 and set a record, for men and women astronaut trainees, by spending 10 hours and 35 minutes in an isolation tank. Like all of the women, Funk was an accomplished pilot and often competed in national races. Wally first learnt to fly, like many of the women, in a Cessna airplane - which joins her on a section of a runway in the vignette.

Dr Lovelace supervised the tough physical astronaut tests for both NASA’s Mercury 7 astronauts and the independently funded Woman in Space programme. The vignette will feature a tilt table, which is still used for training today’s astronaut training. It places candidates at different angles for prolonged periods of time to test the vestibular system - responsible for providing the brain with information about motion and spatial orientation.

The final figure is a woman undergoing the tilt table test. She can be whoever you want - one of the 29 women who took the tests but didn’t succeed…one of the other Mercury 13 members… or even aviator Jackie Cochran, who was the first woman to break the sound barrier and helped funded the programme. Your call.