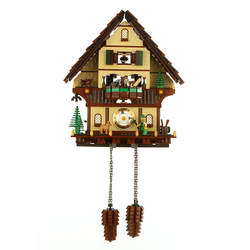 This Black Forest Cuckoo clock was inspired by a trip to northern Italy where I was able to watch master craftsmen carve cuckoo clocks from wood. I was so inspired by what I saw that I wanted to try and make on out of LEGO elements.

Key elements of the model that I wanted to capture were the wooden look you find in traditional cuckoo clock while capturing elements of life in the Alps. In the model you’ll see a wood carver minifigure collecting wood for his own cuckoo project. An additional feature is when you turn the barrel on the side of the model you’ll see LEGO elements rotate around the face that highlight the amazing mountain villages and towns in northern Italy, Austria, southern Germany and Switzerland. These include a mountain climbing axe and rucksack, wine and bread, binoculars, and of course the hooting owl which is found in many cuckoo clocks.

Another feature of this build that was important to me was to capture some movement including a cuckoo that would come out at the top. In the photo series you’ll see an image of the back of the clock which shows how turning the barrel on the side of the model will rotate the cultural elements on the face while causing the cuckoo to move in and out of the clock.

I hope you like the project! My aim was to recreate a classic conversation piece that any LEGO fan would be happy to hang on their wall.