A masked vigilante called the Black Knight begins stealing from the rich and giving to the poor. His popularity increases to the point where marches are being held for him in the streets. Andre begins spending an abnormal amount of time outside during the evenings, causing Oscar to suspect him of being the Knight. [...] Back at Versailles, Oscar confronts André, but he says that he is not the Knight and reveals that he has been going to a church where nobles and peasants gather regularly to hear about "The New Age". Andre dresses up as a fake Knight and begins stealing regularly in order to lure out the real one. One night, the real Knight confronts André and slashes his left eye.

The project of Lady Oscar is intended to be a game, a fun way to learn about the French Revolution. I tried to select the characters whose paths in life are strictly connected. At this time I'm planning other situations and environment which create the world of LEGO Lady Oscar.

WHAT IS LADY OSCAR?

The Rose of Versailles (Berusaiyu no Bara), also known as Lady Oscar or La Rose de Versailles, is one of the best-known titles in shōjo manga and a media franchise created by Riyoko Ikeda. It has been adapted into several Takarazuka Revue musicals, as well an anime television series, produced by Tokyo Movie Shinsha and broadcast by the anime television network Animax and Nippon Television. The show remains incredibly popular in Italy.
The Rose of Versailles focuses on Oscar François de Jarjayes, a girl raised as a man to become her father's successor as leader of the Palace Guards. A brilliant combatant with a strong sense of justice, Oscar is proud of the life she leads, but becomes torn between class loyalty and her desire to help the impoverished as revolution brews among the oppressed lower class. Also important to the story are her conflicting desires to live life as both a militant and a regular woman as well as her relationships with Marie Antoinette, Count Axel von Fersen, and servant and best friend André Grandier.
The setting is in France, before and during the French Revolution. In the early part of the series, the main character is the young, flighty Queen of France, Marie Antoinette, however later the focus of the story shifts to a woman named Oscar François de Jarjayes. Oscar's father, General Jarjayes, despaired over never getting a son (he had six daughters), and decided to raise his youngest daughter as a man. He trained her well in the arts of fencing, horsemanship, and medieval combat. Oscar often practiced her skills with her best friend, companion and (technically) servant, André Grandier, whom she almost always defeated. André was the grandson of her nanny and thus they spent most of their time together in harmonic friendship; near the end of the story, this blossomed into mutual love.
Oscar is the commander of the Royal Guard and responsible for the safety of Marie Antoinette, as well as the rest of the royal family. The story revolves around Oscar's growing realization of how France is governed, and the plight of the poor. Another important storyline is the love story between Marie Antoinette and the Swedish Count Axel von Fersen. The affair between the two was the subject of rumours through all of France, endangering the Queen's reputation and driving Oscar to request the Count to leave the country.
After the Count decided to leave and sign up for the war of independence in America, Marie Antoinette became lovesick. She began spending money in excess —expensive jewellery and clothes, attending balls every other night— to distract herself from pining for the only man she loved. This, in turn, weighed even heavier on the taxpayers of France, and even greater poverty spread throughout France due to Marie Antoinette's squandering of money. 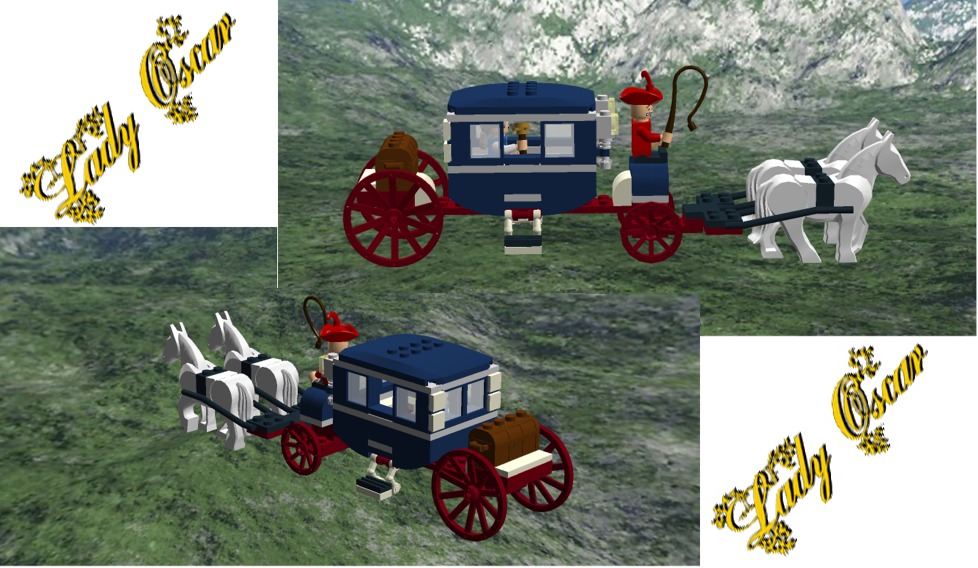 The noble's carriage (Lateral and back view) 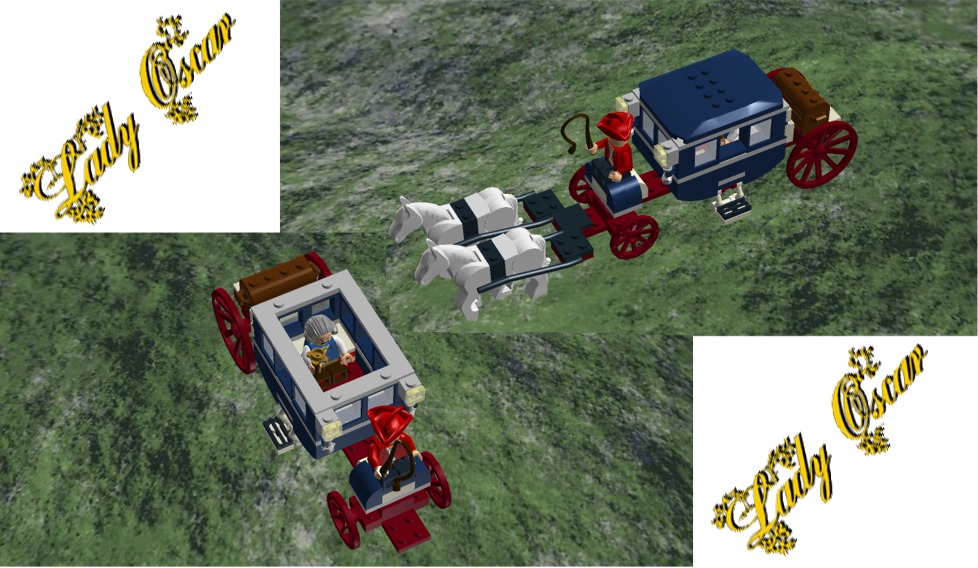 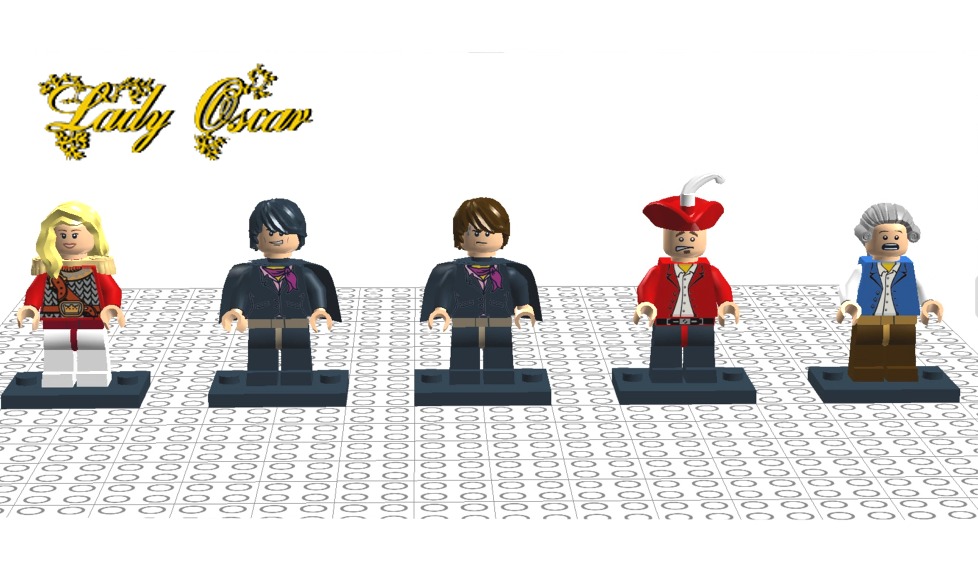 Mini figures in "The black knight"

From left to right:

Born the last of five daughters to the Commander of the Royal Guards, General François Augustin Regnier de Jarjayes (a real historical character), she is raised by her father as if she were a boy in order to take his place and command the Royal Guards after he retires. At the age of fourteen, as soon as her basic military training is complete, Oscar is given the task to protect the Dauphine Marie Antoinette when she arrives at the French Court.
She dislikes court intrigues, but remains there out of loyalty to her father and her friend, Marie Antoinette. At one point, Oscar falls in love with Fersen, who has a forbidden love for Marie Antoinette.
Later in the story, Oscar learns of the political ideals of the Revolution and that the royalist regime is corrupt. As the French Revolution is about to begin, Oscar refuses to sedate tumults occurring in Paris. She renounces her status and her regiment joins forces with the people marching to the Bastille.

Bernard Chatelet (Berunaaru Syatore?) Is a fictional character and one of the main protagonists of the manga and anime series Lady Oscar, created by Riyoko Ikeda. A journalist , he first appears as Black Knight. He steals in the palaces of the nobles and gives everything to the poor. To capture him, André disguises himself and he and Oscar prepare an ambush. Trapped, Bernard fights with André and wounds him in the left eye. Oscar then hits him in the shoulder with a pistol and takes him to her house. She is about to hit him to avenge André but André stops her, saying Bernard fights for a just cause. Then, alongside Robespierre and Saint-Just, Bernard becomes one of the leaders of the people and he will lead, the people to the storming of the Bastille.

André Grandier (August 26, 1754 - July 13, 1789) is a fictional character and the male protagonist of the manga and anime series Lady Oscar, created by Riyoko Ikeda.
In the adaptation of the anime André is the male protagonist of the series.
Grandson of Marie Grandier, the housekeeper of the Jarjayes family, he is orphaned at age six and goes to live with his grandmother at the palace Jarjayes. He grows up with Oscar François de Jarjayes whom he falls in love with since she was a child, but his feelings are not returned until shortly before his death.
He loses his left eye during a fight with the Black Knight, who later becomes his friend.
He joins the National Guard to follow Oscar, who takes command of the guard after she retires from the leadership of the royal guard.