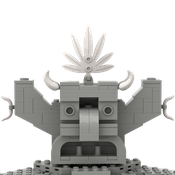 Islanders Spirit Beacon
The islanders are a rare sight these days.
It has been more than 20 years since the Islanders pointed spear and arrow at pirate and soldier alike.
After many years of glorious combat the last of the proud warrior-zealots were defeated.
Their strongest leader: shaman king Kahuka still walks the eternal planes.
The Islanders enchanted island has been looted and pillaged, the tribes scattered to the winds.
A beacon of hope remains deep in the jungle on one of the islands in the archipelago of many waters.
A faceless warrior priestess of the old gods is gathering the scattered tribes.
The whispers beneath her mask speaks of king Kahuka's return.
Broken spears are mend, arrows sharpened, howling of restless spirits in the night.
This "spirit beacon" is heavily inspired by the original statue design that came with
the Lego Islanders enchanted island set 6278-1 in 1994.
It's a scaled up version with many new details that is nice as a nostalgic reminder or as a new playset.
The spirit beacon has multiple chunks that can be taken apart easily for different play configurations.
The statue has a compartment in the back that can serve as a prison or inner sanctum.
A trapdoor leads to a small dungeon compartment were captain cheekbones lurks
A treasure chest is hidden behind the different detachable faces of the head.
The remaining Islanders have adapted to use stealth instead of numbers,
Therefore most of the warriors use the jungle mud and leaves to conceal themselves.
Its probably problematic that they still use the same bright painted shields and faces :P
The zealots and priestess paint themselves with the classic red paint of the Islanders
They are worthy of invoking the spiritual essence that is embedded within the shrine of the beacon.

Mini-figs as seen from left to right:

I hope you folks like this fresh jungle update with salmon and lime colors.
It would be awesome if we have a Lego islanders anniversary in 2024 ;)
Cheers