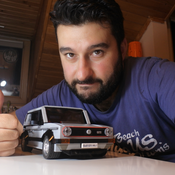 This time my design is Creator series UCS Style Nostalgic Tram...
He is currently held in Istanbul tram is already divided.
This nostalgic tram that has become a symbol of Istanbul, especially because I chose the color compatibility with Lego.
White, Red, Black and very light Gray tones was really compatible.

The total number of Parts;

As a result pf the emergence of various transportation alternatives, especially road vehicles, the trams began to fall from grace on the grounds that they slowed down the traffic.Instead of searching for a method to sgeed up the traffic, a simpler way has been chosen and the trams on both European anad Asian sides were decommissioned in 1961 and 1966, respectively.

After that, the tram, which remained in the memories for many years, was re-commenced between Taksim and Tünel in the 1991, under the name "Nostalgic Tram ". Meanwhile, new railway systems such as modern tram and fast tram were put in to service.

i will hope you like it. Please Support it...