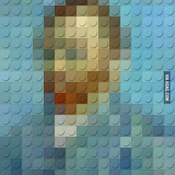 "We must reach far beyond our own lifespans. We must think not as individuals but as a species. We must confront the reality of interstellar travel."

In the wake of a devastating virus wiping out staple crops worldwide, NASA sends a last-ditch mission to seek out a habitable planet for mankind to survive. This LEGO set is a scale replica of the starship Endurance that carries Cooper (Matthew McConaughey) and his crew through the wormhole and across space-time to a galaxy far beyond our own.

The ship features the twelve modules that house the crew members during their flight, as well as the Ranger and Lander craft. The ship's iconic circular shape is created to induce artificial gravity by means of centrifugal force.

Included in this set is 762 bricks, and includes: