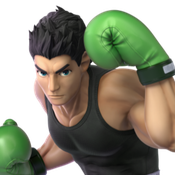 It's boxing's main event! This set is based of off 2009's Punch-Out!! for Wii. It includes all of the original boxers from the original game made out of LEGO in their contender outfits. The main ring measures 21x21 studs and is sturdy due to it's "+" shaped core. It features a mechanism that rotates a small platform that Little Mac can stand on to dodge. Parallel to this is space for the other boxer to stand on. There are multiple structures seperate from the ring, these being, an overhead light that can display the round number, with 3 interchangeable 2x2 tiles with printed numbers on them (1, 2 and 3). Also seperate is training equipment for Little Mac to practice with, these being a training dummy, a ball and chain and a bench. The final addition are stands capable of holding all contender boxers according to their circuit, in the final set, each 2x4 tile would display "MINOR CIRCUIT", "MAJOR CIRCUIT" and "WORLD CIRCUIT" respectively

I believe that this would make a good set as it has lots of new colours which would be useful in MOCS and future LEGO sets (not mine, but in general), it would also be the first Nintendo licensed set (Sonic is SEGA), and another video-game set in general. The Punch-Out!! series is one of Nintendo's smaller licences, so it would easier to obtain than others.

The figures of this set were designed with accuracy in mind, however there are some discrepancies, which I will name after I list the minifigures, these are:

-Doc Louis and a bar of chocolate, his trainer

-Soda Popinksi and a bottle of soda, from Russia

And the current champion, Mr. Sandman, from Philadelphia

Now for discrepancies. Due to LDD limitations, I could not use 3 hair pieces which would greatly improve the accuracy. For Glass Joe, part 21787 would work much better. For Von Kaiser, part 38800 would work better, and finally for Piston Hondo, part 25750pb03 would work perfectly.