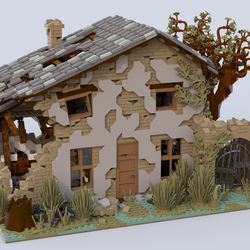 Hello everybody! I am pleased to introduce you my third project on LEGO ideas. This model is also based on V (the television series of 1984-85) and it represents a Visitor Transporter Shuttle.

The Transport Shuttle is completely modular, and it turns into a Visitor Sky-fighter (https://ideas.lego.com/projects/134756) with only removing the centre section and joining the front part to the rear part.

The front part and the rear part are joined to the centre section with Technic Bricks 1x2, Ø4.9, thus facilitating their separation.

The centre section has two lateral doors. Each lateral door is formed by two foldable segments. The upper one is part of the lateral body and it folds up to 80º upwards. The lower one is a double-articulated ramp that forms part of centre section floor and it unfolds downwards, turning into a gangway.

The landing gear is formed by three retractable legs; a front one located under the cockpit, and two more on the sides under the wings. Each leg is connected to a support base by means of a ball joint that allows its movement in all directions. During the flight, the legs are lodged within the aircraft and covered by landing gear doors.

The rear hatch folds 90º upwards, providing access to the gunner’s compartment. The laser cannons slide forwards, protruding from the small opening left by a hinged panel.

I hope you like it. Thanks for your support!