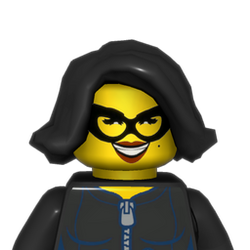 This is a robot that I made. It has a lot of gadgets that come out of it to do stuff that can't be done by its hands.

One gadget is a giant cannon that can blast its enemies into space. Another gadget is used to help him with exploring.

He has 3 guns but 4 including the giant cannon and spikes on his arms. One of its arms has a wheel on it so it can roll on the ground.

The crazy robot has claws!