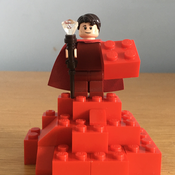 Agent B. Brickster, a legendary MI6 Agent, was making his way through a bustling party at former Agent Phil’s mansion. MI6 has received information that the evil mastermind, Mr. Brakbillder, will be hidden inside the party at exactly 10 o’clock. They believe he may be trying to eliminate Mr. Phil. Spotting the billionaire slipping beneath a small arch and into an empty room, Brickster followed. He approached the room and spied the man sat in a large armchair and sipping a glass of vintage champagne.

”We think the notorious villain, Mr. Brakbillder, may be attempting to eliminate you in your home. He may be in the party at this very moment.”

Mr. Phil swivelled in his chair and a look of shock dawned on his face.

The cunning man man sneered, before turning and proceeding down he corridor. The two men looked confused. He strained to hear any sounds of approaching feet, or rapid gunshots. He knew what was going to happen. It was the man’s signature move.

Brickster yelled, grabbing Phil’s wrist and tugging him behind a large table and flipping it onto its side. The sound of slapping feet echoed nearer, until Brakbillder swooped into the room, a large machine gun in his hand.

The gun fired and splinters of wood flew everywhere...

This model contains 3 Minifigures: Agent Brickster with his pistol, Mr. Phil with his cocktail and Mr. Brakbillder with his small gun and machine gun. The build consists of a large fireplace on the right, the wooden table that Brickster and Phil jump behind in front of it. On the left, the armchair sits, where most Minifigures will fit. There is also the arch at the back of the room, a window on either side. Above the right, one of Phil’s guns is on display and beneath the left, a small table stands with a golden goblet and the bottle of vintage shampagne. The model is also able to be transformed into an intense battle scene, where you can rebuild the table to be broken and damaged and you can  replace certain parts with their broken parts (you do not need to physically break your LEGO bricks). As well as that, this room may be useful for other scenes, such as a Hogwarts classroom or even a fierce battle arena.

I believe this could make a great LEGO set, because of the many play features and display techniques, uniqueness of the build and cool Minifigures.

Make sure to comment what you think about the model and give me any improvements you would love to see in future projects!