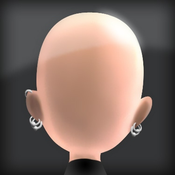 The ZX Spectrum was an 8bit computer produced in eight different models between 1982 and 1987, each with increasing Ram (from 16Kb to 128Kb). The first was expecially created to show the new color display in the family, compared with the black and white of the ZX81, the predecessor.

Despite the fact that in the '80, during the Sinclair vs the World war, I was in another team (I had a C64), I have to admit that the little ZX (pronounced zed-ex) had a really sleek look. And to the eyes of a child black=cool, so... it was a worthy adversary. :-)
This version, as all the Minicomputers I did, is in scale; it has the ZX tipical keys disposition and all the ports (sort of, 'cause the originals were really small). I also did a version with all the circuits inside, but as you can see in the picture, the result is way too thick: the ZX was famous because of its low thickness, so I guess the other is better. What do you think? :-)