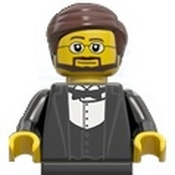 There's a new power on the high seas! The mighty Eagle has set sail with its Bluecoat crew. After using its crane to take on supplies, the Eagle has left harbor in search of pirates and adventure! The crew of Bluecoat soldiers are always ready to defend the ship or explore the open ocean. Under the command of a skillful Captain, his First Mate and a Lieutenant, the Eagle easily navigates uncharted waters.

As their newest ship, the Eagle features two main masts with special sails, four cannons, a crane to load supplies and a crow's nest to scan the horizon. When not sailing the ship, the Captain can go below deck to the Captain's cabin to plan the Eagle's next move. Lift up the helm and open the hinged decks to access the cabin. If the crew needs to resupply, take the longboat and go ashore but stay on your guard. The crew of the Eagle will have no trouble catching any ship on the ocean, so weigh anchor and set sail!

I have been using Lego Digital Designer (LDD) for some time now and have more recently gotten back into the hobby of building with actual bricks. My favorite sets in my collection are the ships from the Pirates series over the years. The Eagle is my first attempt at designing a ship and has undergone many changes over the design period. The color scheme is inspired partially by the Armada Flagship as well as the colors used prominently in the modern Pirates series. I think the white hull with the various blues is a great look and I feel this ship would make a fine addition to the Imperial fleet, which does not have many ships of its own. The wings found on the sails are used with permission of the artist, Katie Litchfield.