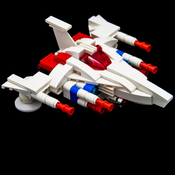 GALEGO is Galaga in LEGO.

Anyone who visited an arcade in the last 2 decades of the previous millennium should be familiar with the awesomeness that is Galaga.  Released in 1981 by Namco in Japan and Midway in North America, it was the sequel to the 1979 game called Galaxian.

This LEGO set is comprised of all 10 characters from the Galaga arcade game along with a commemorative tile with the Galaga logo.  The design was goal was to ensure that each character, when compared to the original 16x16 pixel sprite, would be immediately recognizable and a near pixel perfect representation of their lower resolution counterparts.

You control a spaceship which can move horizontally and fires a pair of missiles.

The 3 main enemies have animated sprites which have both an open and a closed state.  For these characters, the LEGO builds have articulation to allow them to represent both states.  This was a massive challenge for the Galaga Boss as the overall volume changes between the opened and closed states.

When you advance in the game, you reach stages where one of the Bees or Butterflies will transform into a set of 3 other characters which immediately dive towards you.  Two of these sprites were borrowed from the Galaxian prequel.

The Challenging Stages introduce new character sprites. On these stages you have one opportunity to shoot each sprite while waves of them come in and out of the screen.