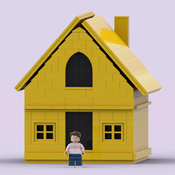 By Brickpicker12
20 comments
Bolt - Rhino’s house
This project is based on the movie Bolt (2008). The project is based on one of the locations in the film: Rhino’s home. I tried to add as much details as I could find in the movie in this model. The model can be used for display and to play with.
As a bonus, I added a Peggy-minifigure and a small side build of her scooter.
Some details about the model
Play features
If you want to make this Bolt set a reality, please press the support button! With enough votes there is a chance it becomes a real lego set! Thanks for looking at the model and don’t forget to tell your friends about the project!