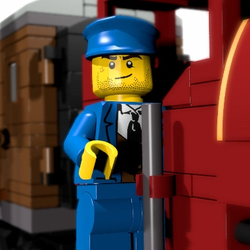 Godzilla is a massive part of movie culture. The most recent movie gave us a beautiful looking incarnation of the creature; something I've attempted to re-create here.

It's original reason for being produced was for the purpose of animation, but it can easily be seen as more of a collector's item. however, due to its poseability, it can still be sold as a buildable and playable figure to younger teens.

Suggestion: A micro-scale, destructible city set could be created for this in order to add playability or authenticity.