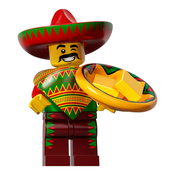 By TheBrickWizard
22 comments
This is a café right on the edge of Lego City, it sits next to the duck pond and is a popular restaurant for tourists and residents. It includes:
3 tables and 9 seats
a platter of cookies and pastries
a slice of Victoria sponge
a croissant
a coffee machine
a till
a fridge
and a friendly pigeon named Steven
It also has a thriving flowerbed, detachable roof and 4 minifigures ( 3 customers and 1 waiter ).
My inspiration from this model came from when I was messing around with some white bricks, I accidentally built a coffee cup and thought it would be a great idea to make a café out of lego. After I built the main building, I realised that the walls looked a bit bare so I decided to add some festive paintings, this was when I came up with the idea to create a Christmas Café. Let me tell you a bit of it's history: it was first started off by a friendly gnome called Jimmy, he originally called it The Four Seasons Café but changed it as he thought it sounded like the name of a theatre show. When he sadly passed away, the café was passed on to his son: Michael. As we speak, Michael is now serving his newest customers, Jeremy, Steve the policeman (who, oddly enough, shares his name with a friendly pigeon) and Corduroy (who shares his name with a type of velvety fabric).
I think this would make a great lego set because it is basically just a modular building but it includes a lot of detail and thought, you can also take the roof off to see inside. The coffee machine can tilt forwards and backwards to brew a steaming cup of cappuccino and it also looks quite realistic.
TheLegoMaster1478