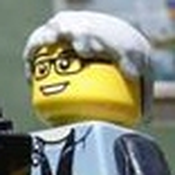 By kaba_and_son
156 comments
This MOC was inspired by the Rooster painted by the 18th century Japanese artist Jakuchu Ito.
I think it would be great to have a LEGO set that mimics the lifelike animal figures that seem to be ready to move at a moment's notice. Especially for adults, it would be one of the best subjects to display in a room. This MOC is one of my "realistically sculpted animal series".
In this MOC, I attempted to express the different textures of feathers, such as the bushy neck, the soft short feathers on the chest, the smooth flowing back, the long gracefully arched tail, and the sleekly elongated wings, by using various shapes of parts, such as slopes, curved slopes, and tiles.
My favorite point is the eyes. I feel as if Rooster's eyes are staring at me, whether I look at them from the front or from the side.
Unfortunately, the two thin legs do not allow it to stand on its own, but I believe I was able to realistically reproduce the way the Rooster walks.