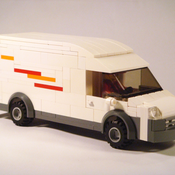 If you would like to see more details of this creation, then you can check out the funny stop motion animation that I've made about it:

As summer is approaching, I wanted to show the transition from winter to the warmer season by means of a creation. And what better setting to use than a rural scene in the mountains, with a house in the centre, built using the traditional Bavarian architecture.

As it can probably be noticed, the creation can be easily split up into two parts ( of equal sizes - two 16x32 baseplates ), by first removing a loose piece that is on the centre of the roof.

The winter side of this scene is almost fully covered in snow, some small green plants emerging from the snow. Nature-wise, there are also two pine trees ( a bigger one and a smaller one ), which have some snow piled up onto them, and a tree on the rock formation on the left-hand side of the house ( there is also a white owl hiding in the tree ).

If we look at this part of the house, we can see that ice cycles have formed on its sides, hanging from different places, and also that a thin layer of snow has piled up on the roof. Besides this, there is also a chimney, which has smoke coming out of it.

Onto the summer side!

Before anything else, we need to acknowledge that the common aspect of these two parts is the river, which comes from the winter part, and splits up into two streams in the summer part.

There is lots of greenery, including plants, different coloured flowers and a couple of trees.

In front of the house ( and under the window ) there is a place where the owner of the house keeps wooden logs and also chops them using his trusty axe.

A dirt trail, originating from somewhere close to the river, leads us to the entrance of the house ( by the way, the door can be opened ). Now that we are talking about the entrance, it is a good time to get to know about the interior.

There are two floors - the ground floor and the upper floor. When you first enter the house, you are greeted by a wooden table with all sorts of dishes onto it, as well as a chalice. Next up are the stairs that lead to the upper floor, having some crates for storage and a barrel underneath them.

As we get to the upper floor, there is only a railing to prevent falling on the stairs, as well as a comfy bed with a night table.