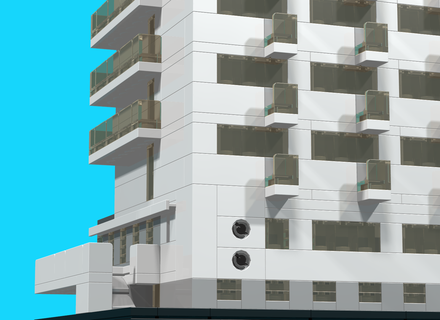 Slight adjustment to the way the end of the terrace is completed, giving a neater appearance from the front. 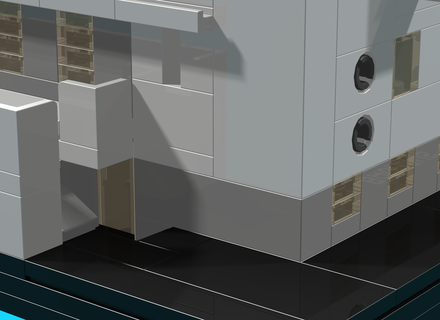 Also consolidated some plates into bricks giving a smoother appearance to the corner of the building near the terrace.

Just a note on costs and pricing.

The number of pieces depends a bit on how you construct it, my version comes out at just about 600 pieces.  At under $6c to $10c for the large number of smaller pieces, with a bit more for the small number of larger pieces, the total comes to about $60.  Putting the build list into Bricklink gives a price about $60 to $80 to buy all the items (depending on new or used), plus there would be the cost of postage.

So if LEGO were to produce the sets (by the thousands) then the retail price for the set should become quite reasonable at under $50.

Here are some pictures of some figures in and around the building to give an idea of the scale of this building relative to the figures that would inhabit and use it. 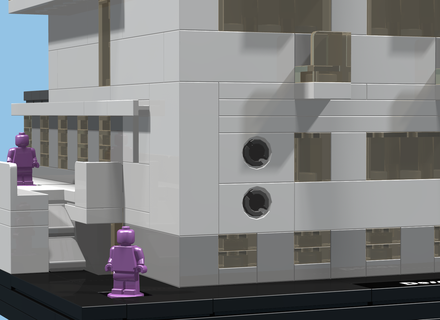 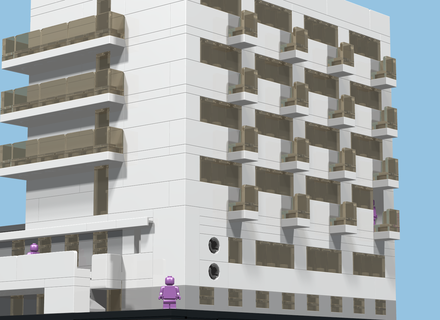 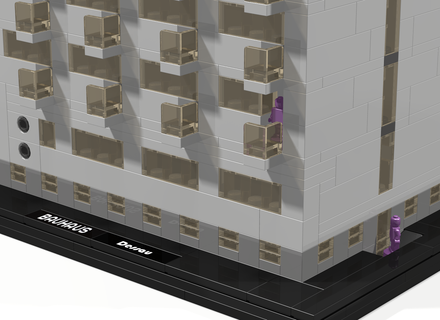 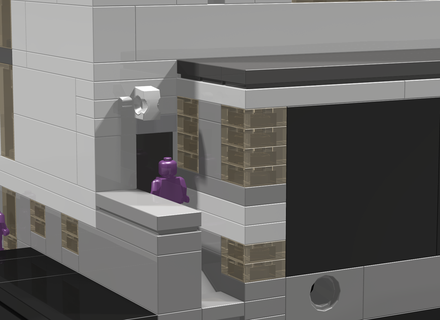 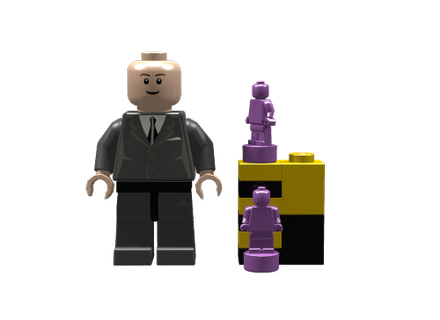 The trophy piece is less than two bricks tall (in fact less than 5 plates tall) and because he's standing on a base that is about 1 plate high, he's actually less than 4 plates tall, which is about one third of a minifig.

So each level in the building is about two bricks high, and to make this building in minifig scale it would have to be at least 3 times as big.  Which, maybe, gives me another LEGO idea ...

Thank you to the 200 LEGO fans who have supported this project so far !

I'm pleased to announce v2.0 of this model. 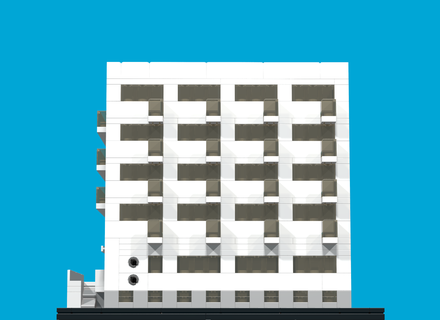 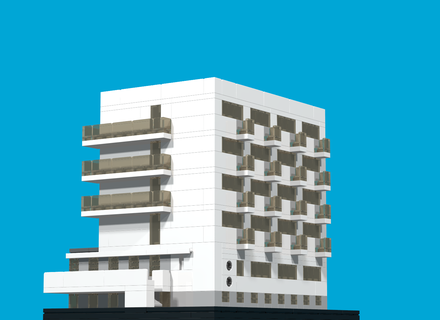 I've included a number of other improvements in the model as well.

- simplified 'modules' provide the new proportions and a regular and strong construction. 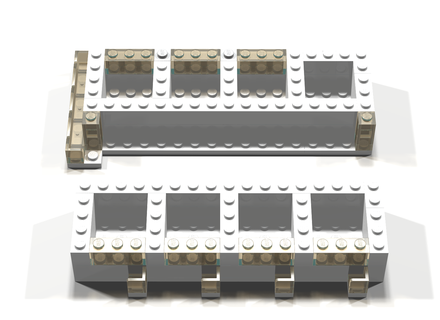 A number of other improvements enhance the accuracy and appearance of the model:

- the lower half of the balcony doors are not transparent, they are black as in the real building

- the basement entrance underneath the terrace is now a step down into a covered entrance, as in the real building, not an external door as I had in the original model

- the terrace now has a balustrade next to the steps - to stop people falling off! 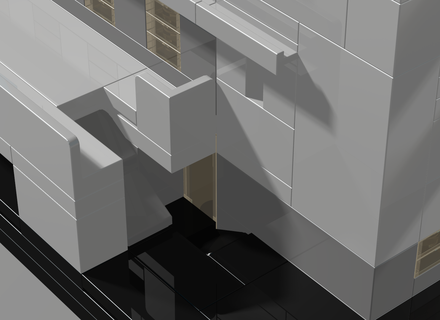 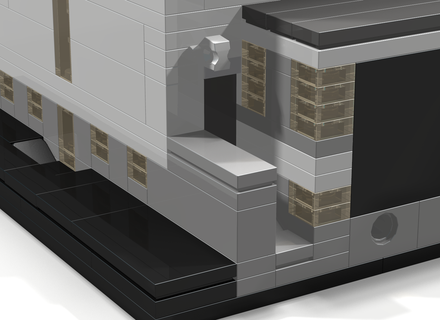 - the windows of the staircase on the side elevation appear as one unbroken block, without white plates separating the floors, this gives the correct effect of a 'block' of grey for the staircase as in the real building. 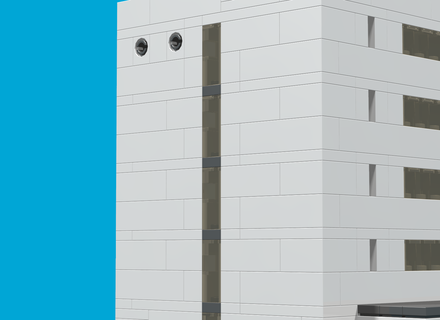 You may have noticed that the base is rather deep at three plates thick.  This is because the ground floor of the real building is partly sunken and there are steps down to the ground floor entrances; this is also represented in the model as shown in the close-up pictures.

Despite this model being slightly bigger and a lot more accurate, it only takes 3 more bricks than the original version! 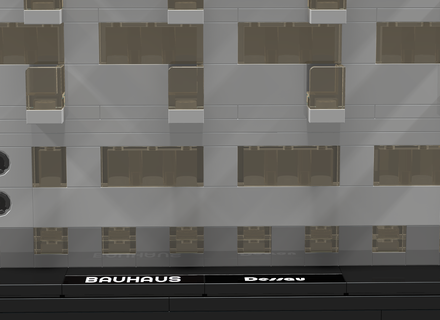 I hope you enjoy these improvements.

A big thank you to the staff at LEGO for choosing my project as one of their staff picks for August 2016.

Also thank you to the over 100 people who have supported this idea so far.

"Want to live like the pioneers of the Bauhaus movement? You can if you book a stay in one of the studio flats in the 1920s Prellerhaus Bauhaus Studio Building in Dessau, Germany"

For those of you who are interested in this building, you might like to know that you can actually visit and stay a night!  See the link below for details and pictures of the real building exterior (and the interior, although I haven't modeled that in this scale).

I've been looking again at the corner vents on the east side of the building.
My original model used bricks placed 'sideways', several layers of plates, and tiles - these introduced build lines into the smooth surfaces of the model. The original purpose of using SNOT (studs not on top) for the corner was to find a way to get the two circular black vents as close as possible to each other and to positions representative of the real building, both in relation to each other and to the adjacent window.
I've found a couple of slightly different ways to implement the vents that does not require the use of SNOT. Here are two options (see pictures) which place the vents in the right place visually, but with a slightly larger vertical separation than the original model. This is a compromise that is slightly less representative of the real building, but still keeps these distinctive features of the building looking 'right'. 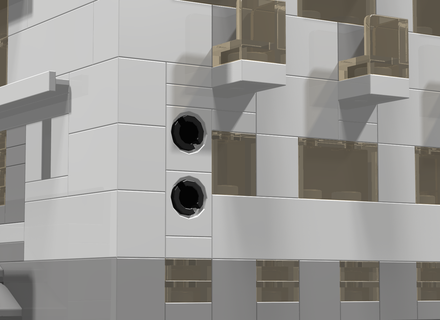 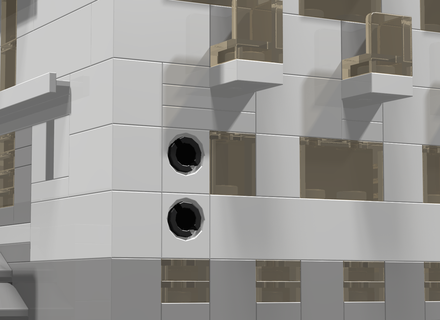 These simplify the construction (the second NoSNOT option more so), make the model neater, with fewer breaks in the smooth walls which also improves the clean lines of the model.

And reduces SNOT for those of you who don't like it.

By Welcome to Euphoria
81 comments