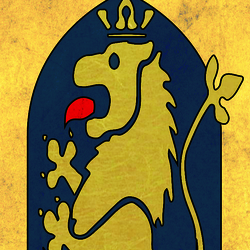 - 364 pieces for the trebuchet

I was inspired primarily by the trebuchets at both the Middelaldercentret in Denmark and Warwick Castle in England, both of which I was lucky enough to see when I was younger. Not only that, but I have always been interested in siege warfare, and that interest has been supported throughout the years by various movies, books, and video games about the medieval period. Check out this video to see The Great Trebuchet in action!

- A desk with plans to build the trebuchet. My attempt at conjuring up a 2x2 tile plan design is shown above. I was not sure about the physics equations included in the plan, as the first, more accurate version I came up with had 6 variables! I thought the math might encourage kids to look at math and science in a positive way, much like 21110 Research Institute, but I think the more complicated original equations strayed from “See kids, math is fun!” to “See kids, math is hard!” I simplified the equations significantly (basic kinematics for those of you familiar with physics), but they do not really accurately describe the motion of a real trebuchet.

In case you didn’t notice, I really like the older castle lines, especially the Lion Knight/Crusader, Black Falcon, and Black Knight factions. Since Classic Space is getting something of a comeback with Benny, 21109 Exo Suit, etc, I thought it would be nice to see updated designs in the Castle line.

There are two things that concern me with the approval process. First of all, although I did not include any new or custom pieces, I had to use a soccer net for the sling. I originally cut out a sling from some cloth, but Da Rules state that you can’t use any custom parts (although you can suggest custom prints). It was actually pretty difficult to fold up the net in the correct way, so this might throw a flag in the approval process. The second thing has to do with the weight. Originally, the counterweight had a mass of 700 g, 1.5 lbs if you live on Earth, and the trebuchet threw a piece a whopping 13 ft (4m)! The counterweight used lead in this case, which is absolutely out of the picture for a commercial set geared toward kids, but there is a weighted piece that TLG used a while ago in boat sets. It uses steel and is much safer, but considerably lighter. I modified the counterweight to reflect this, and the trebuchet now fires pieces 5 ft. This may actually have been a blessing in disguise, since this is a much more reasonable range for play, and I didn’t want kids actually hurting their siblings. I wanted to avoid rubber bands as well, since trebuchets operate through the use of a counterweight, so anything else would feel like cheating. A picture of the evolution of the sling design is shown above.

If you would like to know more about actual trebuchets or make your own, here are a few fantastic links that I found:

http://www.algobeautytreb.com/trebmath356.pdf - by Donald B. Siano. A little heavier on the math side of things, but still really useful for testing a homemade trebuchet.

http://www.real-world-physics-problems.com/trebuchet-physics.html - by Franco Normani. Again, pretty heavy on the math and physics, but I used this site to verify my initial equations. It isn’t limited to trebuchets either; there’s a bunch of cool stuff here.

http://www.virtualtrebuchet.com/ - by Eric and Peter Olsen.  Really fun simulation tool for predicting the range of your engine. Just type in your component lengths and masses, and off you go!

http://en.wikipedia.org/wiki/Mardi_ibn_Ali_al-Tarsusi - Wikipedia page for the author of what might be the first mention of the counterweight trebuchet in history. He hung out with Saladin and wrote military documents.