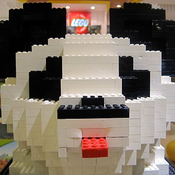 By Panda-Man
0 comments
After buying LEGO's Batcave and building it, I noticed that robin doesn't have any mode of transport (other than his grapple gun), and then I looked at Batman's Bat-Bike. I got to work on one for robin in digital designer and here it is. it is based on the the Batcave Bat-Bike, but doesn't have the missiles and instead some flexible gun sort of things:

There is a circular disc on the top in front of the windscreen where the Robin logo could be placed:

If made into a set it could also come with the Penguin minifigure and some of his minions. With your help it could become an actual lego Product