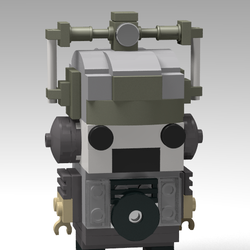 This project is based on the 2013 PC game, "The Stanley Parable" in which you play as a character called Stanley who works at an office as Employee Number 427, until one day, everybody disappears from the office. The goal is to follow the instructions of the narrator. Or not.

In the model, there are 5 different parts, including;

Stanley's Office. The office comes with a computer, a phone, a desk and an office chair.

The Narrator's Serious Room. The Serious Room is where the Narrator goes to be serious. You're teleported here if you attempt to cheat at the game.

The Two Doors. This bit is quite early on in the game. You can either follow the instructions and go left, or not, and go right.

The Baby Game. The Baby Game is a game the Narrator wants Stanley to play after he doesn't listen to the Narrator's instructions. You have to keep pushing the button to stop the baby from sliding into the fire.

They can be re-arranged into whatever way you want the story to go, or you can make your own story piece to add onto the model.